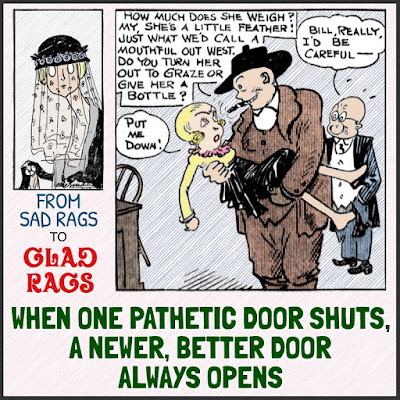 At this point Thelma hasn’t full processed the workings of fate, taking from her a spouse that was pretty good, but never as good as you’d want. That’s a common problem in marriages, when occasionally the spouse has a bad day and each has to return to their mutual corners. Who knows why?

Tom wasn’t a bad guy — not terrible, we've seen worse — and he was faithful and a good provider. But he had an odd quirk, being overwhelmed and doing stupid things when confronted with life's complications. You see, when the Good Lord created dumb Tom took his half out of the middle. Just thinking of him is to wish you never knew him. But let me hammer one important point his friends all make, he was a good provider; providing wasn’t an issue. Sure, others had a lot more, but Tom and Thelma did OK.

And it’s one thing to be crazy kids on your honeymoon, the love light always shining in your eye. It’s another to have the years pass mercifully along, your full happiness somewhere just out of reach. On that score it feels like everyone’s in the same boat. Although there’s a select few born with a silver spoon in their mouth. The rest of us get a ceremonial spoon as a wedding gift.

Certainly Thelma and Tom followed the same clock and calendar as everyone else, and time went by reliably, tick after tick, inch by inch. They were never exactly “stuck” in the same place, but if getting there is half the fun their lives were two halves drab. Thelma kept the wedding gown in the closet and checked it for moths once in a while.

She never wished Tom dead. Not just because that’d be wrong, but because “any old port in a storm.” There were few options in those days. Cheating and unceremoniously dumping the slug weren’t easily done, not on their budget. Which was always tight.

Then it happened, the great tragedy, Tom caught a particularly virulent bug going 'round the factory, and fell dead welding a bolt (some say hinge.) The details naturally aren't that important, but I think it was a bolt. You want a bolt to stay in place, never to swing back and forth; it’s a lot more likely you’d weld a bolt. But whoever says hinge, you have to think they’ve wisely considered the rarity of welding hinges, so that's obviously a sincerely held belief. Or obstinacy.

I heard from other employees who said it wasn’t beyond them to weld everything they came across, including lunch-meat sandwiches so no one would steal them! And it could be that Tom came down with the bug and might’ve said “To hell with it” and brazenly did start welding everything. You'd probably put it among the dumbest decisions of his life, just going by the talk. But I’m not his ultimate judge.

A few weeks passed and Bill came into Thelma’s life. What Tom totally missed in the personality department, Bill more than made up for. A real charmer, but maybe lacking carefulness. I can certainly understand why they’d tell him to be more careful — who wouldn’t be? — after one husband dropped dead in uncertain circumstances.
Posted by dbkundalini at 6:00 AM