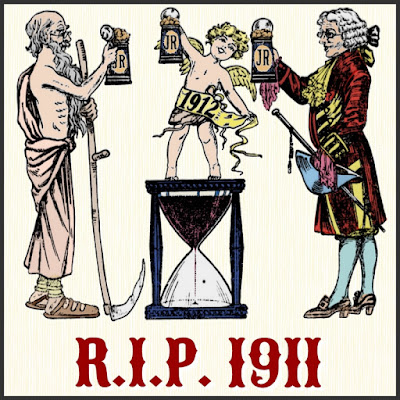 I recently came across this graphic and didn’t recognize it, never saw it before. I have a whole room of hard drives and computers and there’s no telling what I might find. But a few years ago some guys who read my blog came over and were helping me catalogue a ton of clip art. Then we had a falling out, because there's zero nudity in antique clip art beyond the New Year's baby's butt, and they became disinterested. The cataloging process was halted and nothing more done.

But going through it the last few days, this one hit me. I was struck by the sudden realization that I never actually heard that the year 1911 passed away. Of course all of us know at a certain level that past years are no more and future years are still to come. But when we think in those terms — if ever — it's generally years we've lived through, and we have stark memories of them, for instance 1999. I remember buying a cassette boombox in 1999 in case the computer grid went down (Y2K), so I'd have something to hear emergency news on.

The truth is, I’ve been through most of the years of my life in detail, so I’m familiar with each one starting and ending. The other years I've heard of and am generally aware that they ultimately met their fate. Grandma was born in 1903, so I’m squared away on it. And Grandpa had his year, my various aunts, parents, and friends all had their years, as I’ve conscientiously observed: “Those years are no more. There's no bringing them back from the brink. They’ve shot plumb over the edge into the bottomless pit. A brink no longer looms, it’s attained.” Brinksmanship all the way. But somehow 1911 — miraculously? — sailed past my notice! Making me think it sneaked past me with an enemy's help. Which I'll be looking into, because I have some very clever enemies.

1911. It's a year I know nothing about. I do not know one historic thing that happened in 1911! But it was surely a year like any other. There were big cities, there were smaller towns, there were villages, farms, communities of people with hopes and dreams as real as my own. Back then one of their dreams might’ve been to imagine what 2010-2020 would be like, our current time frame. I suppose they imagined us in buildings that float, people with personal planes for getting around, and grocery stores where there aren’t pesky lines. Maybe the next 100 years will bring hovering buildings.

Anyway, 1911 died, awww, sad. So speaking ill of 1911, I can certainly say it is a nondescript year, fairly anonymous, and maybe shouldn't have wasted everyone's time. Just skip from 1910 to 1912. But let’s raise a tankard of JR anyway along with the old Father Time, an Englishman, and the semi-nude New Year's baby. It's 1912! 1911 is finally gone, may it Rest In Peace and in our precious memories with its ups and downs, the good and whatever evil it so maliciously cradled and nursed.
Posted by dbkundalini at 6:00 AM