Maynard And The Blonde 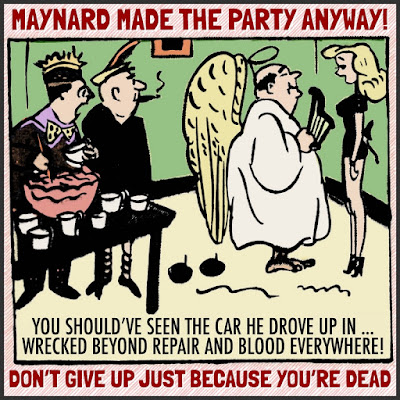 Before I speak ill of dead Maynard, let me commend him first. It shows real spirit to do what he did. I only wish I were so bold, to show up dead at a party! I don't think I'll get any argument when I say, If you can’t be the life of the party, there’s always the other option. If it’s a Halloween party and/or a costume party, as above, so much better. Whatever heavenly robe you have, angel wings, halo, the whole bit, you'll still fit in, with everyone assuming you’re as alive as them!

If you can do it, that is. I don’t believe in anyone limiting him- or herself in decent pursuits, alive or dead, if you can do it. Right now I’m alive, and barring reincarnation being true, I’ve never been dead. Yes, there was a time I once wasn’t here — this is my feeling and if my parents are truthful it’s a fact — but I wouldn’t say I was dead, just not as fleshed out as I'd like. But when you mention it so starkly, it's kind of weird to have not been here but not to have been dead. Some people say they have memories that go way back; I knew a guy who remembered the radio in his cab ride home from the hospital; I presently don’t have memories like that. Just a big blank nothing.

So Maynard had it going on! But he was a fresh corpse, with his lifeblood and whatever else he lost in the wreck still in the car he drove up in! That’s dedication to the party spirit! And he’s able — still manifesting horniness — to approach a cute blonde and impress her with his angel clothes and even a harp! I’d be like, “Hey, baby, this party’s dead, your cloud or mine?” Get a few floor-mats to cover the puddles of blood in the car, and off we’d go.

It’s funny to me that the guy is swirling the dipper in a party bowl of red punch while at the same time telling the bad news of blood everywhere. Clearly a thirsty guy, not losing his happiness over an apparent fatality just outside. I’d like to think I’d be the same way, The Party Must Go On. People die everyday. I drive by funeral homes and don’t give it a second thought. Through those doors, turn left, 12 paces, you’ll be standing at the end of a long aisle. Look at the other end and you’ll see a box open, the dead in perfect repose, awaiting our kind memories and concentrated thoughts on his individual immortality. “Today we consign Maynard to the clouds, in our mind we see him flapping his arms, lifted up, beating the air and making his way toward the God's throne.”

That’s all after the present-day party, of course, Maynard and the blonde. Truly an interesting dead guy! If I had to speak ill of him at all, it’d probably be on this, How terrible it'll be for the woman when she realizes she was literally with a dead guy. OK? That should be clear. Put it right up front and be honest, “Honey, I am literally dead. Full disclosure. But if you’d go with me, I’d be honored to spend some time with you, wherever it leads.” At that point the ball’s in her lap, if she wants to play ball, that's her choice.
Posted by dbkundalini at 6:00 AM