Speaking Ill Of The Dead 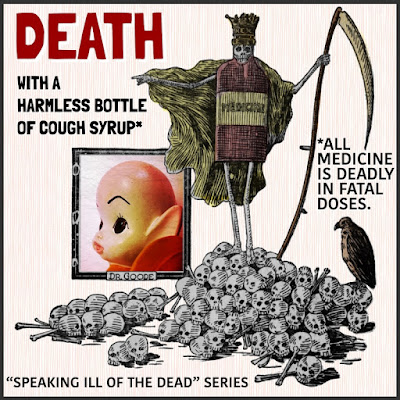 Over the years, I’ve written about my friend Death. Everything from a bleak, moist individual suicide by drowning to the bold firebombing of a nursing home, and it’s been a useful exercise. I can’t even say how many have contacted me, once frozen by the fear of Death by telling me now how they see he's more like grunt labor than an actual monster. Hence, they’re not afraid to go when their number’s up. Some of my pieces have given such comfort that many have actually foregone "necessary" treatments, resulting in happier lives, albeit causing hospital bankruptcies in at least 40 states. But I like to keep it positive ... Undertakers deserve to make a living.

So now, for me -- teary-eyed and sentimental as always -- writing this series is the fulfillment of a lifelong dream, focusing on those who've passed. Not so much about Death himself, then, but looking lovingly on the lives of the deceased, albeit in a critical way, usually coming out with the verdict that they deserved what they got. I've always found it true, the more you nitpick someone’s life, the more you find they weren’t that great. You might say to me, “That’s how you are? Good riddance!” Which is exactly what I'm doing, so you may as well stay...

As a renowned blogger on the subject of death, I’ve had many opportunities for public speaking, sometimes even at the funeral itself, with generous fees received. A couple of points on that subject: 1) I like money; and, 2) I pick up lots of other life stories of loved ones who've passed. They really spill the beans! They go on and on about their terrible personalities, how they mistreated others, dogs, cattle, whatever, with plenty of other flaws, maybe a superiority complex, an inferiority complex, or they just found them too balanced. I encourage everyone's honesty. It helps with my future talks, keeping it fresh, up there riffing about the deceased and their quirks. I may praise them, I may condemn then — usually the latter — but by the time I'm done, everyone's satisfied. Nodding heads and big knowing smiles.

Did I mention the money that I get in the community or at funerals? My absolute favorite part is that I'm actually paid. Of course, at funerals the families like to maintain a more dignified pose without showing off with their money, so they usually slip it to me on the sly, $40, $50, up to $100. That’s nice. My other favorite part is there’s often a big meal afterwards, free food. I’ve been told these used to be sad gatherings, folks with no appetite and lots of food going to waste. But now that everyone’s mood’s lightened — it's a joy to find your loved one wasn't as good as you thought — they’ve even increased the food intake, so it's win-win.

Even as a kid I was big into cataloging people’s flaws, physical flaws, yes, but mostly character flaws. Like, I'd be sitting in the shopping center while my mom shopped, so I'd be jotting down how long people were in the bathroom, etc. Men, women, whatever. The bathroom was about 10 feet from my dentist’s office, so I had all the time in the world.

Little did I know, that’s how they would finally crack the case of an horribly secretive molester. They didn’t have security then. But when the police got hold of my notebooks, they were able to extrapolate and correlate his times of day in the bathroom, descriptions, where he exited, etc., ending in the identity of the molester and the very kids who egged him on and helped him in his nasty pursuit. Remember, he climbed the water tower and plunged to his death rather than being taken, one of my first character studies on the subject of death. I didn't go to his funeral, but that was still my first real payday, Mom treating me to a chocolate malt.

All this month, I’m bringing that same spirit of inquiry and criticism to the dead. Speaking ill of them. One thing I know for sure, those who die today are no different from the villains of the past. If anything, they’re precisely the same. Or exactly the same with some fatal differences.

Related link:
The Gaping Maw of Death, Woof Woof
Posted by dbkundalini at 6:00 AM