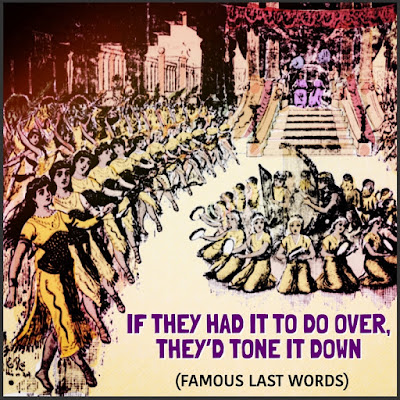 I'm usually intrigued by people who get into reenacting things. Or intrigued about them is probably more accurate, wondering what's wrong with them. But it's still kind of cool. Of course I don’t do it. Just in my imagination on a smaller scale -- everyone does that. You see someone especially lovely, handsome, whatever, and mentally reenact their honeymoon, say, with you in it. That’s normal stuff. We go out to eat and she insists on paying for everything, good stuff, too, steaks the size of my back...

Then there's obviously things that'd be stupid to reenact. I go grocery shopping every week, usually on Monday. I do the whole thing, picking a cart doesn't wobble my arm to sleep, avoiding people as I go through the aisles, looking for things and getting used to where they keep them, etc., and finding a line for checkout that doesn’t have a dozen people in it. But I never reenact grocery shopping later in the week just for something to do...

There's war reenactors, and who knows what all, various historic things like maybe the Lincoln assassination, the pursuit for John Wilkes Oswald, and everything that goes with it, his back story, posing with the rifle in his backyard, nearly defecting to Russia, and the barn burning. And there's other reenactors, like the Titanic. And lesser known shipwrecks, the Minnow, carving a shortwave radio from a coconut, etc.

Here’s one I never heard of, Palace Intrigue reenacting, including a cast of thousands, dancing girls, clowns, regents, kings, queens, jacks, aces, harps, and buildings the size of palaces. Enough floor space to be a sea of glass. See the circle of dancing girls (crouched), that's the actual center of the piece. There’s another row beyond them of flute players, trumpeters, dancing girls clothed and nude, jacks jacking in the corner, and sellers of purple crying out, “Sale today, one day only, half off all purple!” A big deal for royalty.

Maybe I've never heard of it because it doesn't happen... Wouldn't it be too big? If so, this would have to be some kind of wormhole, time machine, or whatever... With the actual people coming back, appearing at random... The real historical scene reborn! With a time portal, an actual historical scene could be witnessed just as it was, and all the intrigue and relationships. You could be there a few seconds and maybe it'd seem like years. Or you'd blink or step away and it'd return to its original stream. Very awesome.

OK, if it's the real thing, there'd have to be life and death issues afoot. My imagination of intrigue always just scratches the surface, but in fascinating ways. With one of the biggest and most unfortunate problems back then being elephant stampedes. That'd be tough to look up and see elephants stampeding at you and causing commotion. Followed by Mongol hordes, anxious to make their mark in the world and not afraid of a bad reputation. Then flames bringing the walls tumbling down, the curtains evaporating in an upward inferno -- quite the disaster, but a potential wienie roast for survivors.

Most of the folks you see in our royal setting died that day. Which seems sad, but of course it's no big deal. 1) Most of them were rotten people, rotten to the core; and; 2) They were from so long ago -- centuries -- that they would’ve been dead of something else anyway. This at least gave them something interesting to do between deaths. One bad thing would be the people of their time wondering where they went. But, again, what can you do?
Posted by dbkundalini at 6:00 AM