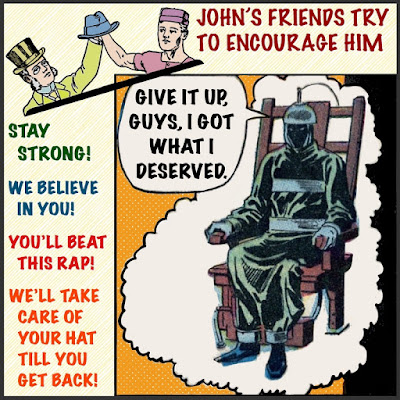 In all my studies and firsthand experience with Death, I’ve never heard one person admit that he or she deserved to die. And we're not talking saints, but people who are clearly bad, their offenses running from pernicious littering all the way up to pigheadedness of the most stubborn type. Whatever the offense, they cling to the false claim that they deserve immortality.

Food for thought as far as I'm concerned. In its absurdity. We should merely shake our head in disbelief and in the next few moments flip the switch. Bye bye. Or if they got an unjust reprieve, appeal it immediately, then with the likelihood that things are again stalled, hope fervently that all-consuming Nature quickly performs its perfect will. The best of both worlds.

I sometimes think about my own looming demise and wonder how I’ll face it. Probably like other problems, like in 2nd grade when I had to have a wart removed from my thumb. Pull in a few deep breaths, shed a few tears, and brace myself with all the peace I can find. Since then, no matter how terrible things are, I tell myself, “See, that wasn’t so bad.”

I don’t have all the facts about the guy in the electric chair. But it's something serious; they don’t use chairs like that for wart removal. It's the sort of chair they use when you "get the chair," an execution. They execute you, then the executor of your estate parcels out whatever arsenal you’ve amassed, or furniture. When you’re up for the electric chair it’s for something terrible. Making your life story: “My Terrible Horrible Miserable Despicable Unnameable Not Very Nice Crimes Against Humanity,” subtitled, “I Got The Electric Chair and They Wouldn't Even Charge My Phone.”

My favorite part of this one is the unshakeable devotion of the friends. It’d be great to have friends like that if you ever faced the chair. The rest of the world hates your filthy guts — I’m as supportive as anyone you’ve ever met and I hate you — but Ben and Frank think you’re OK. Look how they hold your hat in a sentimental way, like you're there and the three amigos are again a thing. You hear the encouraging promise that they'll carry on without you as best they can. Maybe your hat will be in a museum even if your body is thrown to the rest of Death Row to mangle. But there's not much encouragement when you remember the full story. It’s despicable.

Still, it's something! Wish I had that kind of friends. His head no longer in his hat, their hands showing a brave face through it all. One's gold, one's pink, the lonely blue hat carries on without a head. I just shed a tear, choked up by that innocent hat's uncertain future. Whatever the guy did to deserve the death penalty, it's too bad. But there’s no way to turn the clock back and have your happy hat.

We hear his loyal friends calling to him from the waiting room: “Stay Strong! We Believe In You! We’ll Take Care of Your Hat Till You Get Back!” It’s the last absurd bit that gives the greatest agony. Because he's already wearing a different hat, a metal beanie, not his own blue felt. "Give it up, guys, I got what I deserved," the condemned man finally calls out, a virtually impossible admission. To which the rest of us, speaking ill of you even in life, say, "Got that right!" The metallic bonnet starts in with a subtle tingling, followed by the most massive jolt of voltage.
Posted by dbkundalini at 6:00 AM