5 Scenarios How My Life Might've Gone 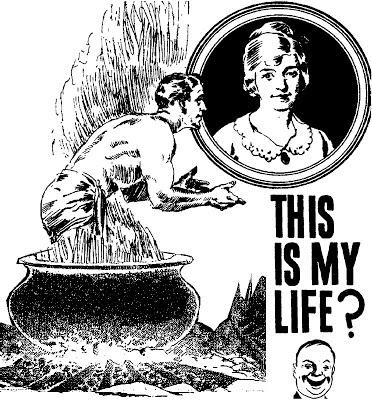 For this you gave me life? Was this your intention when you brought me into the world? Is this the life I'll always have or should I expect another? Woe is me!

Probably all of us, the frequency depending on how terrible things have gone for you, have considered our lives and whether they're all they could have been. It's just something you do, no matter how vain, no matter how fruitless, especially in those times of the greatest loneliness, heartache, and despair. I've done it many, many times, and I've got the bruises on my forehead and the damage on the drywall to prove it.

O! Could things have gone differently? Just a little tweak here or there, a road, a path not taken, a fork in the road I straddled! What would it have taken? More education, psychiatric help, lessons in elocution, or perhaps dancing? I'm as good as anyone else, right? Two arms, two legs, my only real flaw my painful game toe, but if I keep my shoes on, no one sees it.

We take stock like that, which basically comes down to comparing ourselves with others. Again, no matter how vain or fruitless it is. Because wish as you may ... the face in the mirror is always the same. Even though I still have the theory -- and I hope someone will back me up on this -- that if you sit and meditate strenuously enough that your inner essence will rise through your head and you can take possession of some other life form, be it animal, mineral, or another person. I've tried it enough. But my essence always ends up on the couch, looks around and gets scared, and immediately rushes back home.

Until I get that right, I really only have two choices: 1) Be content and even thankful that I am who I am and make the most of it, a very levelheaded approach; or, 2) Waste my life by stewing over it, always imagining, always wondering how life might've gone, if only ... Given the choice, then, and stating it clearly like that, and being fully aware that Number 1 is the only real option, I'm taking Number 2.

SCENARIO 1 - Things could've been much worse. I could've been born in an oddball place, to totally strange parents, and been a mangled physical wreck right from the start. Like some of the gator catchers, turtle catchers, cat whisperers, hog-fishers, and other assorted human vermin on current reality TV shows. Still, the advantage those folks have over me is that they do have TV shows, and they're making big money, because the weirder the better. But my advantage is long-term, because those shows will go out of favor someday, and in their despondency they'll get eaten.

SCENARIO 2 - I might've pursued a life in politics. They emphasized politics and government when I was in school, since it was a time when they were pushing for 18-year-olds to vote, and idealism was rife. We thought we could change the world; other kids thought that. Fortunately, I was one of the few who was able to look at it all askance, knowing that politics is a complete dead end. If you want to be instantly corrupted, go into politics! You're always in someone's pocket, your service is worthless to the general public, and no one likes you. Look at it this way: We've had politics forever and Republicans still exist. That's not progress.

SCENARIO 3 - I should've learned music. Seriously. I see someone playing the piano and I think, That could've been me! Or the guitar, which I can play half ass. Or the auto-harp, to me a complete mystery. Or the harmonica. I seriously think I could've been a major star, one of those guys who comes out with long tails and bows five or six times, lights his candelabra, and enthralls the people with yet another version of "Voices of Spring," which I know from the Three Stooges movie, Micro-Phonies. I often think of the Three Stooges when I hear other guys singing classical music, like arias, and how they shot grapes and bananas with their fingers into the singer's mouth. That might be why I never learned music.

SCENARIO 4 - I might've gotten a better education. As it was, I couldn't wait to get out of school. I think it was the 4th grade, after we learned arithmetic, that I figured up by addition precisely (more or less) how many days it was till I graduated. Then I stole about 130 rolls of toilet paper from the pantry and had it strung all over my room, so I could pull off one small sheet for each day of school that went by. It was OK till about the 8th grade, when my dad finally decided enough is enough. He came in and literally tore down one whole corner, and ended up wiping his ass with my whole junior year.

SCENARIO 5 - I could've run away and who knows what might've happened! It's just like in time travel movies, change one little thing and everything else changes. Let's say I had run away after my dad did that. I always had this theory that I could run very far to the north if I just set my mind to it. I sort of halfway tried it once and stepped on a thorn before I got out of town and had to go home and go to the emergency room. But my theory still stands. If I could avoid thorns, I could run far, far away.

Then I'd get a job with a carnival or circus, like Toby Tyler, and meet all sorts of interesting people. I might've charmed the Snake Woman and started a little brood of my own. Or, who knows? A wayward evangelist might've kidnapped me and taken me on the road, having me repeatedly saved and/or healed in his services. He could've performed the lengthening-the-short-leg trick on me. Then we would've sent KFC buckets through the congregation, getting enough love offerings to be rich.

At some point, no doubt he would've caught me in the embrace of a naked girl in a barn, and from there the imagination just has to assume my life would've been one happy ending after another, with her or others. Continuously rolling in the hay, all over the country, going from barn to barn. Which I'd still be doing today. Rolling in the hay and rolling over and saying, "Was it good for you?"
Posted by dbkundalini at 9:55 AM