The Government Is Coming! 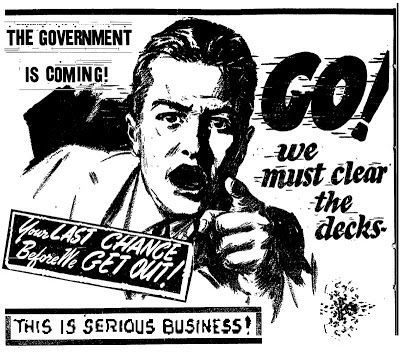 Now we all know the full extent of the government's snooping program. They felt it wasn't something we should know, and since we democratically elected them, and they serve the people, with the people being their bosses, it seems only right that we should've had to learn it by underhanded means. Whether the information will do us any good is still to be determined.

Many, of course, are unhappy that they've been doing it at all. As we know, though, many are simply unhappy people and are never satisfied with anything in life. Others normally have a happier outlook and so their unhappiness is a little more legitimate. I fall somewhere in the middle: I'm sometimes unhappy and sometimes happy, so I can see both sides. And on this issue, I'm a little on each side. It doesn't seem like it needs to be secret entirely. What kind of terrorists are we protecting ourselves from? Are they so innocent that they don't know we're even slightly devious?

Most of us are happy when there aren't terrorist attacks. That's the justification for all this. On that subject, though, there's a couple different ways to look at it. Which we were saying in the Bush years when all this bullshit was going down. 1) Are we willing to give up all our liberties and privacy over the miniscule chance that any one of us would be the victim of a terrorist attack? You have a better chance of dying from secondhand smoke from three counties away. We ought to be following the Cheney Doctrine, if there's only a 1% chance secondhand smoke from three counties away is going to kill us, we ought to be building a big wall and installing fans. 2) Can't they just kill the terrorists and leave the rest of us alone? Or maybe make a more wonderful world where people don't become terrorists? Like in the Tao Te Ching.

Personally, I see it as overkill, needing the complete records of all of us, just like it's overkill to strip search grannies at the airport. They've been perfectly normal, harmless people all their lives. They have no criminal record, they haven't done time. Their friendships are mostly with other members of the Doily Club. The idea that they should suddenly be strip-searched, and given this potential thrill in their lives that late in life, might be bad for their heart. Then the government would have blood on their hands, not that it's bothered them thus far.

Take me, though. A strip-search now and then would probably do me good. I've honestly never carried contraband or presented a second of harm to anyone in my life, but you never can be too sure. I feel shifty sometimes, that normal malaise the daily battles of life gives, I carry a certain amount of existential guilt, thanks mostly to my religious upbringing, and that extra punishment, the strip search might be redemptive, depending on how far it goes. Go far enough -- one drop of blood -- and I could redeem the whole world! IHS. Then 2,000 years from now, an unknown citizen -- we'll call him Walt -- will be testifying in church, at that point held under bombed-out interstate bridges: "The Grandma Slump guy was thinking about me. Had I been the only sinner in the world, He would've died for me." The imagination of people runs wild. And the imagination of Saviors.

Then once the whole world is redeemed, we won't have to worry about terrorists. That's the idea, anyway. But how to get everyone to accept the redemptive work (1), then to live 24/7 in the light given them (2), means we're going to need a whole new missionary emphasis. We'll be sending missionaries to the ends of the earth, meaning terrorists will be coming out of the woodwork, confessing their sins and accepting the new grace. Whatever phone records the NSA missed, the redeemed will present in hand, detailed printouts, of how, yes, indeed, they did conspire with my Grandma to blow up the World Trade Center, meaning the surveillance on her was justified all along. Turns out my whole family was involved, from Cousin Roto scheduling flight school classes in the barn to my blind Cousin Connie (a man) hiding Mohammed Atta in the outhouse. Guilty as charged!

Part of the complaint we the public have about government snooping is how secure our personal information is. They assure us it's perfectly safe. No one's looking into it. No one, that is, except this one guy, a lone wolf, who managed to download everything they have without anyone noticing. Not only that, but he was able to flee to Hong Kong. Sounds secure! With all the logistics the guy needed to do it, I'm suspecting UPS. (I wouldn't have the first idea how to flee to Hong Kong, let alone what I'd do once I got there!) The fact that our government had someone in their midst like that alone means heads should roll. How the top man still happens to have his job -- assuming he is a man -- is beyond me. We should examine some of his phone-computer records. Was he playing Farmville on the job? While the fox was in the chicken house, was he in the barn rolling in the hay?

It's a Hogan's Heroes moment. "No one has ever escaped Stalag 13! I know nothing, I see nothing!" Yes, I have all the information in the world at my fingertips, but still this one guy was able to steal the whole store. Wouldn't you think they've have some sort of software good enough to detect massive downloading? I think I'm more pissed about that than anything else. If they're so incompetent at oversight, how is it they're fully engaged at the switch protecting us from terrorists? While this guy was on the phone arranging the logistics of his world travels with UPS, why wasn't anyone noticing? Someone needs to order something from Amazon. I know the only time I never see a UPS truck is when I'm expecting something.

The lesson for the rest of us is to flee now! We're governed by incompetents! They can't even keep track of the people working for them. What do you mean Ed's in Hong Kong? I thought I just saw him in the hall! We could be safe from terrorists if the government wasn't asleep at the switch. Maybe we need to get George Bush back. He was stupid and looked it, so we had no temptation to trust his sorry ass.
Posted by dbkundalini at 10:28 AM