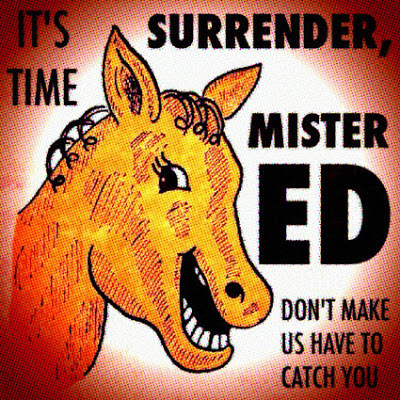 I was absolutely besieged with well-wishers and others singing my praises yesterday for my post, "We Got Bin Laden, We'll Get Mister Ed." I'm actually a little tired today because I didn't get much sleep last night. Readers from many time zones around the world kept me up. It was exhausting, but also very gratifying. It meant a lot to me.

And, I had to chuckle, there were even a few readers from Hong Kong, Moscow, and Ecuador who basically wrote, saying, "Please, get him out of our country or city!" It seems like they're afraid he'll get a job in their country next, then compromise their security by too much stealing. It just goes to show, whatever your nationality and whatever your background, you're paranoid about the same things as me.

But yesterday's gone. Now it's today. So I thought, you know, maybe I'd go to the well one more time, since I love your praise. The memories of it, after all, are still clear in my mind. My right arm -- my dominant arm -- is sore from the fist pumping. But it's a pain that I enjoy, because of how I got it, by pleasing you. Does that make sense? I really think I'm on to something: All I have to do is find some famous scoundrel in the news and publicly take him to task. And my blog really takes off! It's sort of devious, I know ... [devilish grin].

OK --- THIS IS AN OPEN BLOG POST TO MISTER ED, MY MANE MAN. LISTEN UP, MISTER ED! LISTEN TO ME AND COME OUT, WITH YOUR HOOVES IN PLAIN SIGHT. SHAKE 'EM, LET'S SEE THOSE FETLOCKS!

Mister Ed, I know you used to read my blog. You told me so that time you downloaded every entry of every blog on the internet and put them in everyone's individual file. As you recall, I was irate. The government I could handle. But you threatened to show it to my minister, thereby threatening me with excommunication. That was despicable. But I paid you off, and after a few months, it all went away. I can only assume you still visit here occasionally, although now that you're on the run, no doubt you have only stolen moments for savoring it.

So I will be brief. Mister Ed, all horsing around aside, the time has come for you to give yourself up. Do not make them have to capture you. If you give yourself up, that will be seen as a goodwill gesture, and things will be easier for you. They might even give you greener pastures. Only, please, whatever you do, for God's sake, give yourself up before you ruin our relations with the Ecuadorans. From there the dominoes could only topple, and we'd lose Mauritania, Togo, Texas, and the tiny island nation of Podunkia.

Honestly, Mister Ed, wither or not you'd admit it, you should've known better than to have (allegedly) stolen all our national secrets, including, you bastard, my data from the NSA, detailing all my alleged misdeeds, the foremost of which would have to be my spotty calls to my mom. I know the rap: You must be a terrible son, calling as infrequently as you do. And there she sits, with several diseases, staring almost hopelessly at the phone. And I know there's some stranger stuff in my file. Like when I called Al Qaeda. I swear, my call was nothing more than to ask them how they managed to have their name start with a "Q" and it's not followed by a "U." I didn't know that was allowed. It should be Al Quaeda, like that.

But enough about me. The government actually wants to geld you for showing the vulnerabilities of the NSA, that it's apparently overseen by three monkeys, See No, Hear No, and Speak No Evil. Whether they even have locks on the doors has not been established. They might've been "locking" the place with duct tape left over from the Bush administration. For you to have carried out over 2 million documents without a hint of suspicion sounds like quite a feat. I'm thinking back to that time I ripped one measly MP3 file off a neighbor's CD at 3 o'clock in the morning in the middle of the Sahara Desert, and the FBI was right there to pick me up, staying true to their warning label.

Do I relish the fact that you're in big trouble? you're wondering. You're damned right I do! It couldn't happen to a worse guy, after how you threatened me. And all my loyal readers -- you screwed them over too! Let's just say, you're something less than a thoroughbred... OK, Mister Ed, you get the message. Give yourself up today.
Posted by dbkundalini at 1:05 PM