The Best Number of Slaps When Slapping 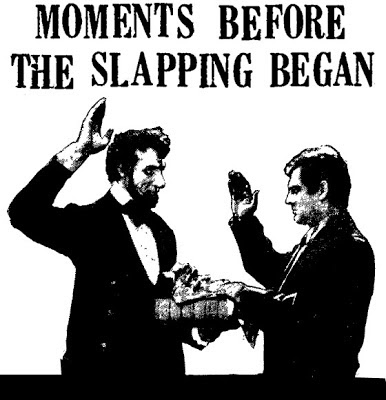 Here's a post for both classes of people, those into numerology and those into violence. It combines the violence of slapping with numerology and the "feeling" that goes with particular numbered sequences. Practically, in my opinion, if you were to slap someone, one slap is usually good enough. But beware, if you slap twice!

Two is not usually good, strange as it sounds. But it's something of a mystery how numbers work. So that if you slap someone twice, it doesn't seem sufficient. Two is more than one, of course, but two always seems to demand a series. It demands three.

Think of it in terms of its sound: "SLAP, SLAP" ... trailing off, it's wimpy. But add the magical third and you've got a series worth the time, and somehow completely satisfying. "SLAP, SLAP, SLAP." Topped off, perhaps, with a single dismissing word, "There, sir, now back to your place!"

Numbers are a weird thing. I'm sure it's mental, but maybe it's also cosmic. Certainly the mind has an uneasy feeling if numbers are left hanging. But it feels entirely satisfied when there's a beginning, middle, and end. The word 'denouement' comes to mind. If the second is your idea of a denouement, then clearly your idea of denouement is all screwed up.

Remember in school when they taught us outlining? They said outlining can have two items, but preferably at least three. However, for whatever reason, it can't have just one item. If you start with a Roman numeral I, you have to have II. I've often thought of the quandary, what if there is no logical second on a particular topic? You're left with the options, I. Don't Outline It, or, II. Make Up Something. Another option, making II, would be to subdivide I, since you could zoom in on almost any subject. As an example: Say you lived on Earth when there was only one super continent, Gaia, before continental drift. And your topic was "The World's Continent." An inappropriate outline would be: I. Gaia. That wouldn't do, even though you only have one continent to work with. But zooming in, you might put, I. East Gaia, and, II. Other Directions of Gaia.

But I want to get back to the SLAPPING thing. It's sort of like Zorro quickly carving his Z on someone's back. The "Z" has those three lines, so it's "WHACK, WHACK, WHACK". Had his name been VORRO, you can see the problem, "WHACK, WHACK." He'd have to do something else, like stomp his foot on the third. That'd actually be a pretty cool thing, because it could offer variety to the show. Vorro does the two whacks, then a different third each time. Stomp his foot, stab the door, yell his name, etc. And the same thing with the Lone Ranger: "Hi-yo, Silver, Away!" Stop at "Hi-yo, Silver!" and it leaves you hanging. Silver doesn't know what to do!

Now, in slapping, the third slap is the satisfaction slap, obviously. But what of a four-slap series? To my mind, it feels excessive. But it really depends on what you're trying to accomplish. Maybe you want to truly cause damage, in which case the more slaps the better, certainly stopping before you hurt your hand and aren't able to slap in the future.

There's a whole thing you can read about in C.G. Jung's writings on the Trinity (3) and the Quarternity (4). In many cases, Jung saw a quarternity as more symbolically appropriate, not stopping short. Whether it be the godhead or a footstool. Be that as it may, and even if it sounds like a subject for me and other high-minded professionals, specialists of the mind and spirit, there are important implications for the rest of you, the common run of man. We might settle and say an odd three is good and sometimes four. Still, that even four might demand an odd fifth, because there's something intangible suggesting that those the beats of a slapping sequence need a final flourish, an ultimate slap, one standing alone.

Some of these things you can visualize without doing them, which would probably be best, not only for the other person's face, but for your hand. You get a sense of it in a flash, then if needed, for further appreciation, you could just move your hand in the air without making contact. That's all I'm doing here, and I find that in an experiment it works tolerably well.

I honestly cannot see much reason to go beyond five slaps. Unless, let's just let our imagination run wild, you're trying for the Guinness record in slapping, at which point the feeling of numbers is no longer germane. And simply trying for the highest number possible doesn't carry a feeling. Plus, it's all bogus at that point anyway, because they'd give you 53 minutes to slap, and 7 minutes break every hour, which to my way of thinking is simply dishonest. Either you slapped continuously -- this is the way I see it -- or you didn't truly accomplish something worthwhile. Anyone can take breaks.
Posted by dbkundalini at 10:29 AM