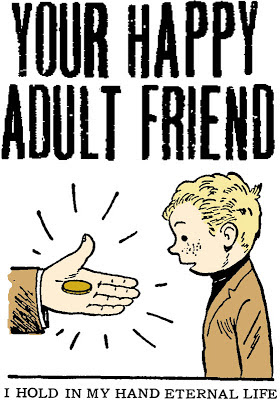 The scene is a cavernous auditorium. The sound is reverberating off the walls and ceiling. Five hundred notebooks are open, with participants jotting notes, learnings, gleanings, and techniques. It has a very nefarious feeling, which is an accurate feeling.

The lecturer, a slimy guy in a slimy guy suit, you know the sort, has a darkened visage. His main features are literally in the shadows. You can barely make out his eyes, they're just that shadowy. He's looking down at the overhead, adjusting the transparency. It is a chart. It is scientific to the nth degree. They've got this stuff down to a terrifying science.

The participants have paid big money to come here. It's all quite hush-hush. I'm not here, you can't prove I was here. And it's true -- you're never going to know. They've got something to hide. They really do. Although, and this is particularly nasty, they don't seem to have a guilty conscience about it. Their consciences have apparently been seared.

How do I know about any of this? I'm sorry, I'm not at liberty to reveal how I happened to be there. Only, I wasn't there as a waiter or server, nothing like that; I was trusted. Why I was there wouldn't do you any good anyway, or any of the thousands out there who, quite frankly, are in danger of losing the most joyous part of their lives. Instead, look after your kids! I feel I have to say it, Parents, please know what your kids are up to ... and what the agenda of their "happy adult friends" is really all about. If they go to a meeting somewhere, check it out; know what they're doing!

The auditorium becomes a bustle when the leader instructs the assembled group to break into smaller groups. This in itself is a weird socialization exercise, because you don't know these folks. I'm looking around -- Does anyone want to be in a group with me? What if I let something slip? Such as my pure opposition to everything these bastards and their network of like-minded individuals stand for? That asshole who had a Hefty-sack full of heavy metal CDs and was stomping on them, I don't want to be in a group with him.

Of course, it's all group-think. That's my word for it. They've got one ultimate agenda, and while some arguably mean well, they're mistaken, deluded, dangerous. How much better it would be as a kid to grow up with your mind developing in good ways, and not with someone else's weird agenda. My basic objection would be: These people ultimately don't know what they're talking about. If it could be demonstrated they had the sense of a fruit-fly, then maybe.

Here now they're going over some of the basics of child psychology, the making of decisions by particular ages, the ways of persuasion, when to give rewards and when to withhold, the latest techniques of multimedia, including computer graphics and video -- "Cartoons are a great tool..." -- how to divide them up to reduce resistance, on persuasive touch, and being the kind of person they will trust with their lives.

The whole dynamic of the thing, concerning the last point, is that you have to be their "happy adult friend." Because most of their adult friends, and they may have very few, are keeping their distance, not having a point of view to convey; they're usually friends with their parents, people not looking for an in. Meaning, and this point is set forth as a major aha point, that "our role" is usually completely unfulfilled. It's like a turkey shoot. Shooting fish in a barrel!

So what becomes of these specimens? They've got the follow-though to show up, you have to give them that! They show up with a vengeance, like an entire laboratory on two legs, and they're very insidious. These are your children's happy adult friends. Wake up, parents! The whole thing stinks to high heaven!
Posted by dbkundalini at 3:45 PM