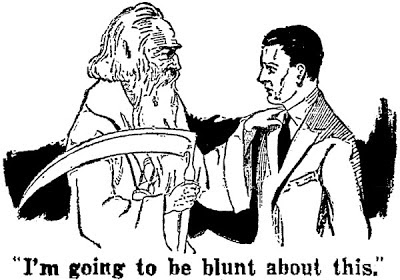 This story didn't happen to me. It happened to a guy I'm calling Walt. Walt came just that close to Father Time, he of the mighty scythe. Very close!

Father Time appears from time to time. Usually around New Year's, but that doesn't preclude other visits. When he appears, it's most often bad news. Like his own temporary death in late December. If he appears to an individual any other time, it is said, it's usually bad news for that person.

Well, Father Time did show up before Walt, scythe in hand, with a word: "You've wasted me. You spoke of 'killing time,' then followed through on it. I felt myself weakening, and it was only because of many other people, good people, passing me in the proper way, that I regained strength. Now you die!" With that, he raised his scythe...

Walt yelled, "Wait! You're Father Time, please give me just a moment. Let me explain. I thought I needed to waste time, for my own well-being. I didn't know it'd hurt you. By 'killing time,' I meant taking time for relaxation, chilling out, and taking time to play with the kids."

But Father Time would not be reasoned with. "Kids have all the time in the world. You were simply wasting your time playing with them. Let them go outside. They can play outside. They'll entertain themselves. You've made very unwise choices." Walt tried to object, but Father Time slashed his scythe through the air and nearly took off his head.

The old timer then paused, "I am stolid in my conviction that you should die. But I am also merciful. Use me wisely, or next time I won't miss! After all, you're the one who first spoke of 'killing' me. It'll be your turn to see how it feels."

Walt moderated himself, not wanting to incite Father Time any more than he had to, as he was clearly unhinged. He raised his hands, conceding the point. He thought, 'Give him his space. Keep calm. Let the old bastard state his case, then I'll get the hell out of here.' He asked, "What should I be doing?"

Father Time's will for Walt was this: Sleep deprivation, staying on the treadmill of life, burning the candle at both ends, striving endlessly, hungering to see another day, and creating meaningless goals. "Your prayer should be that you will live to see your great great grandchild graduate from college. Then knock yourself out in order to make it happen!" He further directed Walt, "And buy nursing home insurance -- you're going to need it."

Walt saw in this some kind of omniscience on the old chronographer's part. "So I will live that long?" Father Time was quick to answer, "I didn't say that. I'm Father Time, ever in the now, never looking ahead. I couldn't if I wanted to. But what I have said, I have said."

What an admission! He may as well have lifted his robe and just let one fly in the breeze. It'd be worth about as much. Walt concluded all at once that Father Time is just a worthless old personification of the inexorable slipping of one second to another. The old bastard doesn't know anything, and if he does, it doesn't amount to anything. Basically just a pompous old poser.

Walt was nothing if not bold. With that quick insight, and knowing he had the upper hand, he was quick to the ground and back up, throwing dirt in Father Time's eyes. In a flash, he grabbed the scythe, and with equal quickness whipped it through the air, cleanly cutting off one of Father Time's legs.

As Father Time writhed on the ground, a bloody mess, Walt ran away, yelling back, "I will waste you if I want, I will kill time! Your ideas of the future suck!"