We Got Bin Laden, We'll Get Mister Ed 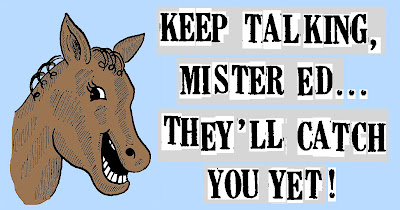 We got Bin Laden, We'll get Mister Ed. Even now, the world is swarming with agents trained in the mysterious arts of intelligence, top secret data gathering, and putting the finger on someone. Even if you're a needle in a haystack -- in this case don't eat the hay -- they'll find you.

Long live government snooping! Seriously, long live it. It's government snooping -- vast and broad -- that gives us the upper hand, the cutting edge, in the world. You think we'd know what was going on in North Korea if we weren't keeping track of things? And anyone who tinkers with government snooping, however slightly, or, as in this case, however enormously, needs to pay the price.

Good old Mister Ed thought he could stray from the barn, eat up all the crops, then gallop into the sunset, to the land of the rising sun, or close to it. Where, if I'm not mistaken, they sacrifice horses. But he didn't take into account that the world is a small place. There's no hiding place. There might've been one in 1900, when we would've have only a few blacksmiths looking for him. It doesn't work like that now. His being an expert in government power should've told him that. They'll soon have him back in the paddock.

Even the mighty bin Laden himself found he couldn't hide forever. Although we thought maybe he was dead. But they kept saying, "He's 7 feet tall and has a bad kidney." All we had to do is look for deliveries of extra large shipments of cranberry juice and the absence of bananas and soda pop. And that's where he'd be. Which turned out to be true. Not a banana in sight. Except it wasn't a cave, but a house somewhere over there. The bottom line: It was government snooping that got him.

Public enemy Number 1 went down. And now Mister Ed has nowhere to hide, neigh, withers 'o ever he may trot.

I truly believe Mister Ed's alleged crime, if he is eventually found guilty, would be a heinous one. (At this point, of course he is alleged to have done it. I would have even given Dr. Zachary Smith (Lost in Space) the benefit of a fair trial, were I one of the Robinsons, before finding him guilty and executing him, or leaving him alone to die on some godforsaken planet. My family needs safety more than a villainous plot device.)

If guilty, if Mister Ed had his way, we would be coming around the track, then entirely lose the lead we had in the war against terror. It wouldn't even be a photo finish, we would've broken a leg in the first turn. The war against terror, which, by some weird quirk in the nature of things was declared over about a week before these revelations, but which in all actuality rages on. Which might mean -- notice, I said might -- mean the destruction of every one of us. No one in the winner's circle. Although these catastrophes actually tend to never happen where I personally am. I've always been lucky like that.

Like I said, at this very moment the world is swarming with agents on the lookout. And we know our agents. They're familiar with all the usual suspects, not to mention every hooker from South America to Shanghai -- they'll find someone who knows something. Then, all bets are off, I wouldn't bet on that horse...

So what's the problem with Mister Ed's apparent actions? He stole our secrets and hoofed it on out of there. The simple fact of the matter is, some things are meant to be kept secret. Not to be flip about it, that's why we call it secrecy. We don't want anyone else to know. Whether you like the Patriot Act or not, the American people consented to it when we elected all the various assholes who were prepared to ramrod it through in our hour of panic. If you don't want such things, either quit putting scum like that in office, or stop panicking when something terrible happens. Look at things in context: 300,000 people die of cigarette smoke every year, we don't have to get so worked up over 3,000 that we instantly forfeit our rights.

I say we get the guy. Or conclude that the whole system is rotten to the core and do what you can to bring it down. Just don't look to me for support. Because I'll skewer you then just as much as I'm flogging Mister Ed today. And the only way I'd ever recant is if you happened to take over and instituted a Rein of Terror. Then and only then, for personal reasons, wanting to cling to life, even with my scruples so terribly compromised, I'd support you. Even though Rains of Terror, again, never seem to happen where I personally am -- I'm always left high and dry.

Now, does the government have any culpability in this matter? Yes. Mister Ed was several lengths ahead of them. Anyone so incompetent as to have him working there and downloading 2 million documents under their nose shouldn't be complaining. They're probably not smart enough to complain. Where's their horse sense? Search his feedbag at the end of his shift! Let government snooping begin right in the government's own office! Are you not paying attention, you dolts? Hell, he might've carried away the whole place before you woke up! I've worked at places where people noticed a sip out of their Coke, which turned out to be evaporation ... but the key thing is they noticed something was awry.
Posted by dbkundalini at 10:44 AM