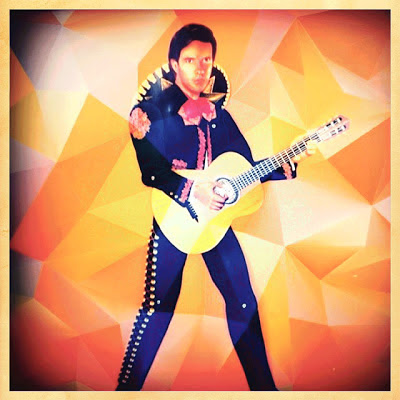 Hell of a picture, huh? That's one of mine, a Hipstamatic edited. I saw a reference the other day to "El Vez" the Mexican Elvis. I'm thinking this isn't him, but it might be. Whoever he is, he's definitely got it going on. "You ain't nothin' but a chihuahua, you ain't never caught a rabbit, and you ain't no amigo of mine."

If that was the face of Mexican music, I'd be OK. In fact, I'm OK right now. What do I care? I well imagine if I lived in Cuba, I'd get used to seeing cars from the '50s all the time. And if I lived in Mexico, if that's the music I had, I'm sure I'd eventually fit in. Get me a big old weird accordion and show me a few notes, I'm sure I could grind out something. Or one of those fat assed guitars.

You have to give the Mexicans this much: They have the happiest music I've ever heard. It's always perking along, bubbly as it gets. Which is a feature of accordions. It makes everything sounds like jelly beans. Bubble pop clown eyes music. It just gets tiresome after a while, some days like five minutes.

I was out for Mexican today -- with a date (it's true). I like this one place where it's authentic. Which of course leaves out the shams like Taco Blech and other places like that. If you want the little tacos with the enormous chunks of steak, and the onions, and the little greenery, you gotta go authentic. Only, they haven't been making it near greasy enough for me lately. I don't know what the problem is. I like it greasy. I've been having pain in my finger joints, which I blame on them not giving me enough grease. Seriously, folks, do I have to bring my own grease? I don't know how to make it as good as them.

When you're out on a date, of course you want to make a good impression. So I did what any paramour does, stuck a napkin on his hand and moved his fingers on the table like two legs dancing. And what dancing! The happy authentic Mexican music was bubbling along. That was fun. But once the amusing stuff is over, and you're just sitting there listening to the music -- this happens occasionally -- you start getting a queasy feeling.

We had to laugh. Yes, this is one of those days! Good grief, that's awful! But they seem to love it ... they must love it, it's constantly on, the same thing over and over. How can they stand it like that, forever? Surely there's cultural differences, I appreciate that. But this is strange. It's like it is the '40s or '50s forever. Big old tubas, and weird whiny instruments. And accordions as far as the ear can hear! The style never changes!

Usually, I like it -- or am indifferent. Not today. It was absurd. It really got to me. And I'm not one of those guys into ethnic judgments, even in jest. I'm a bleeding heart. I'm no Don Rickles. Live and let live.
Posted by dbkundalini at 3:54 PM