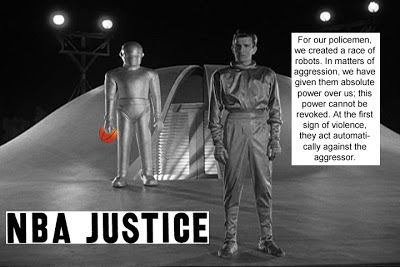 I like NBA justice, very swift and certain. The replays don't lie. A muscle-headed jock says something, he can't unsay it. It's a quick suspension or thousands of dollars in fines, just like that!

I really haven't followed basketball at all till just recently. And even now I'm not diehard to the point that I know very many people, their careers, their records, etc. But now that I've dipped at least my toe into the clear waters of major league competition, over the last year or so, I'm starting to hear the news. Had you heard Michael Jordan retired? Me either!

Now, if a guy like Roy Hibbert, who I hadn't even heard of before a couple weeks ago, says something stupid and immediately gets a $75,000 fine, actually before I even heard of the fact that he made the remark(!), that's registering with me. Or if Chris "The Birdman" Andersen pushes a guy to the floor and proceeds as if nothing happened, then gets a suspension, I'm noticing. I've been listening to some of the commentary on the games, although I've usually got the sound down and my iPod on, and the guys are weighing whether the fines and suspensions are adequate to the various offenses. Only to a certain extent are they questioning whether the NBA should be able to go back and look at replays, then come up with charges beyond what the refs called. Essentially, they're OK with the system.

And I'm OK with it, too. That's the way it was when we were kids. If we had a pact and someone ratted out on us, it wasn't even a formalized process, you'd be immediately suspended from club activities. I'm happy to say, I was a pretty faithful club member. My clubs were The Bee Club and The Spy Club. I'm a little ashamed of the bee club, but I guess it had scientific value. We'd get a few bees in a jar, keep them till they were very worn out, then let them crawl on us. The fact that they never stung us was amazing to people. As for the Spy Club, we investigated things and thought we had an enemy club, although there were never any actual confrontations. We did a lot of sneaking around. In both clubs, as I've mentioned before, I was the baton twirler.

Clubs and teams -- sports leagues -- have it better than the normal justice system. Like the justice system in Kafka's "The Trial" has it better than the normal justice system. They're able to make their own rules, and no matter how inscrutable they are, you either abide by them or pay the price. With sports leagues, maybe they're somewhat scrutable; I'm only speaking in ignorance of their rules; it's hard to believe they're entirely arbitrary. If Roy Hibbert says something that is currently socially-unacceptable, though, it's different than if he would've said it several years ago. So there's a varying standard, no doubt. Whereas flagrantly pushing a guy to the floor would've always been frowned on.

It must be a big responsibility for those in charge. Because how do you decide precisely what the penalty's going to be? $75,000 is probably nothing to someone with tens of millions of dollars. But it's immediate cash flow, rather than something tied up, and maybe he needed it for daily expenses, dinners out. Suspending someone from a game where he might make a difference in the series, that's a pretty big penalty. But it had to be something like that. It'd be sad if basketball went full hockey.

I like the old movie "The Day the Earth Stood Still." We used to see it all the time as kids and it terrified me. Klaatu came to Earth and made it stand still to give us a message from the other planets. It seems they all formed a big league, the major league of planets, the National Planet Association, and put their own created robots in charge of the law. And now we have to adhere to the same law ... or else! Klaatu says, "It is no concern of ours how you run your own planet, but if you threaten to extend your violence, this Earth of yours will be reduced to a burned-out cinder. Your choice is simple: Join us and live in peace, or pursue your present course and face obliteration. We shall be waiting for your answer. The decision rests with you." So far we've done OK, having not found life. But I'm sure if we ever do find life out there, we'll ruin it.

Obliteration! Couldn't they just suspend the Earth's rotation around the Sun a few years? That way we'd behave ourselves and never grow old.
Posted by dbkundalini at 10:12 AM