Things You Can Still Do Without The Government Knowing 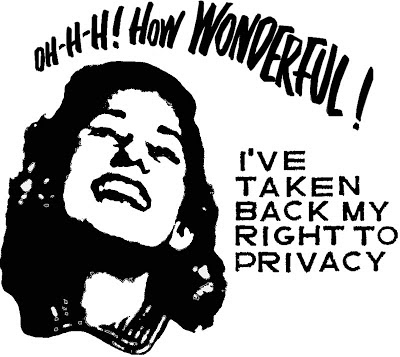 What in the fark was I doing losing it anyway? Except that 9/11 happened, everyone (you know the sort) got frightened, at at least pretended to, and next time you went to open a savings account you were treated like a terrorist. Because if one person in a cave (we thought) in Afghanistan was a terrorist, maybe we all were. It got so bad we even had various litmus tests. I went to a gas station where they wouldn't sell you fries if you asked for French fries. Seriously.

Now, in the last few weeks, there's been revelations that all our phone records are a matter of top secret information-gathering on the part of the government. I wasn't shocked. I thought that was happening already, that and more. There's nothing in the world I wouldn't put past them. And when that's true, just let your imagination run wild. Certainly we know our every move is tracked or traceable, with video cameras everywhere, the trail of cell phones, internet usage, ebooks, cloud drives, bank withdrawals, etc. And even if it's not the "government" doing it, we know they have instant access to it any time they want, as in, and legitimately so, the Boston bombing.

So, alas, those were the good old days, those thrilling days of yesteryear, back when we went around pretty much without a trace. No cell phone. If you were a block from home you might be anywhere. The only video cameras were the ones Action News used, which you never saw. And so forth.

Library book sale -- Of course if the government wanted you to know if you went to the library book sale, that'd be easy. You traveled public roads and paid with a debit card. But they don't necessarily know what you bought. There's a couple of checkout ladies, who seem fairly nosy about what you've got, but they're being more friendly than anything. You could buy something from this checkout lady, then something from that one, etc., until you worked your way through the whole box.

Silent prayer in the garage -- Silent prayer is always best anywhere. It's closer to actual meditation, closer from making a production of things before the Divine. Who are you trying to impress? My thought is, naturally the house is bugged, if anything is. But they don't know you're going to be in the garage. Then if you do choose to pray silently there's really nothing for a bug to pick up. I don't know of any current technology that picks up silent prayer. How God manages it? God's the ultimate snoop, I guess.

Drink coffee at coffee places after paying with change -- Again, you're on video getting there. And you might have bugs in your clothes. And your money might be marked. But it's conceivable that you could go to a coffee place, let's say with change. Dollar bills have serial numbers, change doesn't. Who you meet there could be dicey. Personally, I wouldn't meet anyone. They might be informants. And the coffee lady, she might be one. Drinking coffee at home might be safer. If you must go out, drink it as fast as possible and get the hell out.

Dreaming -- It's obvious. This is like silent prayer. They're not going to know what you're dreaming. Unless you're stupid enough to write it in a Dream Journal, which New Age magazines suspiciously always give away as subscriber premiums. Hmm. As for me, I dream a lot but I don't remember them clearly after the first few waking moments. I met a guy a few weeks ago who said he never dreams, which I take to be either an outright lie or he's mistaken. Now, though, on reflection, I'm thinking maybe he thought I was an informant.

Listen to music -- I'm putting this on the list even though I know it's tricky. You will need an old fashioned CD player. Even a record player won't do, because the vibrating stylus is easy to bug. Your player can't have Bluetooth either. And your ear-buds have to be completely inserted, no gaps. Then you'll need to play it at the absolute minimal volume. Of course, any MP3 is encoded with identifying information, especially if you're getting it off a Cloud source. The best recommendation here is to be discrete and to avoid guilty pleasures, just in case.

Picking your nose on a boat -- If you're on an open boat, thanks to telescopes, it wouldn't even be a matter of privacy to pick your nose and toss it to the fish. They might even see the very minimal ripple on the water and charge you with littering. But if you had a houseboat, you could go inside, allowing for all the usual rules of bugging and video devices perhaps being present, turn out the lights, pretend you were silently praying, then pick your nose and palm it. Then, with the appearance of washing something off your hand, you let it go, and the fish get it. If the fish shows up at the shore, opening its mouth with the picking on its tongue, bearing witness to a game warden, you're on your own! I used to go fishing with Grandpa, who had the greatest luck by merely farting on his bait. But Grandpa lived in a different era, when you could get away with that. Thanks to the Patriot Act and the NSA, I've quit farting all together.

Visit my blog -- No, you can't visit this blog without leaving a trail. They know you've been here, and obviously I know you've been here. You know that little camera on your computer? That's right, straighten your hair a bit ... what a mess. Why look so quizzical? I can see your hair and everything else. Including the old Sitting Bull poster on your wall and that stack of erotica on the shelf. You've been a bad boy. You've offended my sensibilities...I'll be reporting you. Sitting Bull, wasn't he an enemy of the U.S. Government in his day? You don't think they've forgotten, do you? Now you're palling around with him! And as for the erotica, we know what that's all about. There's a heat-detecting sensor built into your bed. And they've charted some interesting heating/cooling cycles when you're in bed, right before you're dreaming and "forgetting" your dreams. You're busted!
Posted by dbkundalini at 4:22 PM