Part 2 -- Have Scythe, Will Travel 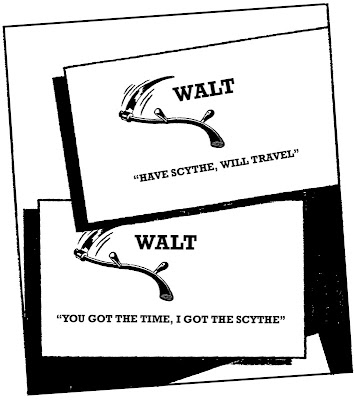 Years passed quickly, lickety split. You know how time goes. Sometimes it seems like it takes forever, then 40 years are gone. Cute little kids are suddenly ugly adults. It's a slippery slope, like ice. No one likes cold, but what can you do? There's plenty of things I don't like, but I still have to put up with them.

Walt had his complaints, too, but he could only press on, clutching Father Time's stolen scythe in his hands. He was like a fugitive, his life completely changed, forever on the run, always looking over his shoulder, never getting too comfortable. Because Father Time's vow had been that he would kill him. And now that he had cut off Father Time's leg, it might be hard to get back into his good graces.

But then quite a few years went by, and in all that time he never once encountered the old man again, so he started to think maybe the scythe had great powers of protection. He toyed with the idea that the scythe was the source of Father Time's power all along. But he was never comfortable.

It went on like that. Then, after 10 or 20 years wandering and hiding, Walt sought to regain his confidence and went far up into the mountain, where he contemplated the whole thing. Then, while resting on a precipice on one knee, and watching a circling eagle, he came to an inner knowledge that his time of going down had come. His old fear was gone. So down he went, arriving in a small village and appearing in their marketplace. As the townspeople gathered around, he gave a sermon on time: "The idea of wasting time is a lie. Your ambition to redeem time is the true waste. Do whatever you want, it's all the same."

The people of the town figured he was just a crank who had been exposed to too much of the blistering sun, either that or he was crazed by love and feeling, and internal thoughts protracted among endless solitudes. And now he had come to ensnare them in the same craziness; that's why he came down, they reasoned, to give us this obviously false message.

But suddenly, in addition to the prophet being there with them, there was in a beaming vision a naked child in a barrel, who appeared in their midst without warning. Walt felt himself go faint, nearly a dead faint. Could it be? Was it? Yes, it was Baby Time in an unformed, nebulous state, like he was out there somewhere, craving to be reborn. The barrel covered him like the protection a turtle gets from its shell. Also, he had no scythe ... and was so helpless he wouldn't have been able to use it anyway.

None of the greybeards in the town had been able to silence Walt, but this naked child not only silenced him, he made him go completely mute. In fear, Walt raised the scythe, motioning the others toward the child, as if to say, "Let's get him!" But none of it worked, the people apparently transfixed and in too much fear.

In that instant, Walt's prophetic voice returned, and he implored the people. "It's you or him!" But the child vanished, leaving the barrel behind. The townspeople had now been worked up enough to kill the child, had he not vanished, but they could only destroy the barrel, breaking it down to its constituent parts, several staves, which also vanished as if they'd been mist.

Walt rallied their flagging spirits with one final sermon, ending with these ominous words: "He's out there somewhere! We shall find him! We shall kill Father Time!"