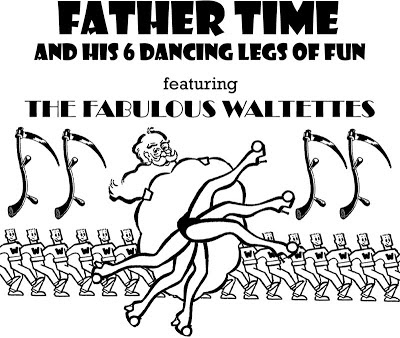 The vision of the naked child, having been revealed as signalling a potential rebirth of Father Time, seemed to mean one thing: Father Time was somewhere in the area.

In his last sermon, Walt promised the people they would kill Father Time, and further rallied them to, "Chase Father Time to hell and back if necessary. However far it is, however long it takes, we will ensnare him, and once ensnared, we will kill him!"

Then it all happened quite quickly. Father Time was just over the next hill, standing there on his one remaining leg. The leg Walt had severed with the scythe was a healed stump, which would've been tough to see under his robe, but he had hiked the robe up momentarily to scratch an itch. When he saw the people coming out with swords and staves, and Walt there in front, the most prominent, with the scythe, he showed his vulnerability by dropping the robe. By dropping the robe, I mean he dropped it to the ground, then on his remaining leg, hopped over it.

Father Time stood naked and proud! He seemed a sympathetic figure. The people stood there in a phalanx, not knowing what to think, while Walt proceeded forth alone. "You have come to kill me, haven't you, Walt?" "Yes, " Walt said, "and not only to kill you but to send your soul to damnation," not understanding the nature of anything. And with all those years of contemplation in the mountains! What a dope...

Without delay, then, in rashness, Walt charged ahead. But Father Time stood firm, yielding himself to the scythe, simply allowing Walt to hack him to death. That was simple, Walt thought. And he kept thinking it, until the pieces of old Father Time's body vanished, and a new Baby Time appeared in the same place, this time not just a vision. Walt had unknowingly reinvigorated Father Time, being lured into it.

The baby spoke: "I am Father Time. The idea of me ever being old, or for that matter, young, is nothing but a crock of crap. You cut off my leg, yes. But you see now I have two legs. And I could grow back six more if I wanted!"

The people in the phalanx suddenly sensed themselves withering away to nothing. They were being judged. They wrinkled up quickly, something fierce. In a moment, they were all dead. As for Walt, he was granted several minutes for his final contemplation, but death for him would also be swift. He complained, "So you got me, did you? Now I must die, having never had the privilege of someday seeing my great great grandchild graduate from college. If I have only one regret, it is that I ever thought of 'killing time.' Now I see, I should have set forth better goals for myself, then knocked myself out trying to reach them."

Baby Time aged quickly and was now Father Time again in appearance. He raised his scythe in a kind of salute toward Walt, sort of like what you see between bitter enemies in Star Trek, a nice recognition of spirit and life being held in common, regardless of how apart they are in values and background. But suddenly there was a frown on Father Time's face, and his grasp on the scythe was intense. Walt seized up in excruciating pain and fell dead.

Concerning the townspeople, it's very interesting that the ones who died were the more high-minded, involved ones of the town. Only the ones who'd been oblivious to the whole struggle of life, who didn't care, were able to live happily ever after ... till they would eventually die of such old age that they were content to go.

Finally, in the lore of all this, there went this saying abroad, that from now on Father Time would appear not only with his two normal legs but six other legs besides. But he had not said that he would grow six legs, only that "I could ..."

PART 1 -- Father Time Being Blunt
PART 2 -- Have Scythe, Will Travel
Posted by dbkundalini at 3:08 PM