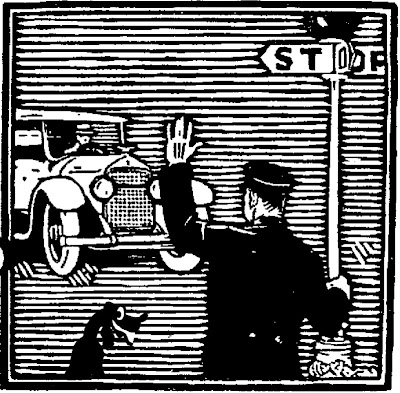 As the police have faced greater and greater challenges from ne'er-do-wells and their ability to commit worse and worse crimes, so they have had to come up with better ways to enforce the law. It used to be they could simply ask you if you were doing something wrong and the guilty look on your face would give you away. But as crime has gotten so much worse, so the brazenness of the criminal has increased.

The police have had to up their game in virtually every aspect of law enforcement. From the affairs of school truancy all the way up to grand theft auto. The old rules no longer apply. What was good for one generation has proven dismally ineffective for another. Jesse James was a handful, the newer breed can't be contained. I think it all started with Capone and Dillinger, very tough groundbreaking hombres.

So that's the situation. You have to fight fire with fire, you have to match what you give with what you get. Like breeds like. Yesterday's techniques are old hat. You either stay one step ahead of the criminal, or you're five steps behind. They've given themselves over to crime so completely, if you don't give yourself over to law enforcement in equal measure, they'll always be that much farther ahead. If you start out behind, you'll never catch up.

One way of catching up and even going ahead is in technology. Police scanners, private radio channels, bigger and more powerful guns, cars with overdrive, louder sirens, and spike strips. Another way is an old fashioned way, the usage of dogs, man's best friend. It's true. The dog is no longer good for nothing but to be the family pet. He can also be deployed as a member of the force, an actual officer on the force. Using dogs in police work, they call them the K9 division, a play on the word "canine," another word for dog.

What can a dog do in this K9 work? We might answer the question more easily by asking what they can't do! They can't fill in paperwork, although they can carry it desk to desk. They can't read someone their rights, although there is a push for a recorder to be hooked into the collar that reads someone's rights, triggered by the dog hitting the switch. And they can't drive the car, although, again, with an increase in technology, such as the Google cars that drive themselves, it's probably only a matter of time before dogs will do the whole thing!

In the last few years, something they've discovered dogs can do (and do very well) involves their powerful sense of smell, already legendary in the animal world. They can smell your trail, giving them the ability to do reliable "bloodhound" work, tracking you. And they can smell drugs, having been trained. If you have heroin, cocaine, or marijuana, along with any other drug, they'll find it. Presently, the human officer gives them a signal, "Smell, boy!" (in German; K9s are often trained with German commands) and off they go, alerting the officer to the presence of whatever illegal substance there may be, whether under the seat, stitched in the ceiling, or simply on the seat in plain sight.

A K9 I was personally able to witness one day, when I was given a community tour, sits in the backseat of the patrol car. At the times the K9 is there, the window is rolled down. Over the window is a plastic mesh screen. The human officer might be over yonder somewhere, looking for a perp. Then he's suddenly in danger -- the perp is after him. The officer simply pushes a remote, the screen flips down, and out bounds Officer Fido, to the rescue. It's awesome. This same officer, at the tour, had on a big heavy indestructible suit. The dog clamped his mouth on his arm and the officer waved him around in the air. The dog was flying through the air with the greatest of ease, but he would not let go of that sleeve. Let's say you're the perp. You don't want a K9 with that kind of tenacity holding you! You'll give up!

How, though, is life unfair to the K9? Let's say the human officer stops for lunch at a BBQ place. The dog is sitting in the car, the window's down, and the smell of the BBQ is filtering in like crazy. He's sitting there, salivating, wishing he could have some. This is where it'd be interesting if the dog could flip the remote somehow himself, then go into the restaurant and clamp on to a rack of ribs. The cook is waving him through the air trying to dislodge him, but he may as well give up. The ribs are ruined anyway, since the dog's already had his mouth all over them. They may as well give them to him, except, of course, for the fact that once trained in this, it's tough to break them.

In conclusion, I'm sure K9 animals eat well, although probably not that well. As far as sniffing drugs, that's just a part of their job. They sniff them and find them. They get a treat, perhaps, and the police nail their perp. It's all in a day's work ... for the drug-sniffing dog.
Posted by dbkundalini at 2:00 PM