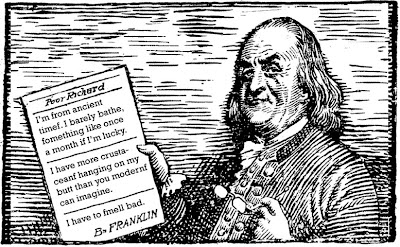 I'm a normal guy at a normal boring event. There's a shuffling hunched usher, decorum is rife, and everything's nailed down. Things are so somber you could cut it with a knife. It's time for an enormous burp.

If we've learned anything from the movies, it's that comic relief is always welcome. It breaks the tension, it puts everyone at ease. You've got the sense to do it, too, to your credit. And maybe it's even you on the spot. They've called you on the carpet for something. The boss is dressing you down. What better way to get back into his good graces but to burp loudly, or even fart? Anything funny like that will bring the house down. It's uproarious.

Have you ever been there when a family's planning their father's funeral? They denied death so long, even though it was clear he wouldn't last forever. And that's all it is, denial. Brother stands against brother, the whole story. But then death has come and now they have to face it; it's not going anywhere. The funeral director's there, appearing concerned for them while guiding them toward making expensive choices. It's all somber as hell, because no one wants to appear cheap. Then one of them -- a wag -- emits a gigantic "BURP!" There's a few titters with the tears, then they're rolling in the aisles. You know how it goes.

Just writing this brings back a flood of memories to me, the memories you suppress or don't appreciate fully at the time. Think of the same brothers. The fact of dad's death has softened the edges of past disagreements. Then there's a little burp, followed by the eye contact of questioning, subtle facial gestures as if to say, "What?" Suddenly then, the years melt away, and they're kids around the family table of so long ago. There's a chuckle of recognition of common memories, then giggling, then pretty soon everyone's burping loudly. With the same going for farting!

Which brings us to Benjamin Franklin, our common American ancestor. Such a famous guy from so long ago, and he wasn't even president! As I recall, wasn't he America's top negotiator at the tables of Paris, France? We had some problem, let's say, with the French, so we sent over our top negotiator, our top diplomat. The same guy who, incidentally, is responsible for the book, "Fart Proudly."  And he no doubt burped from time to time, too.

So there he is, Benjamin Franklin, taking a boat across the Atlantic, about a two month trip at the time, engorging himself on boiled cabbage. By the time he gets there he's bloated up two times his normal size. With such gaseousness, of course he's going to break the ice. The French were putty in his hand. And I believe that's how we got the Statue of Liberty. He was at the table and brought the house down.

Finally, back to funeral planning for Dad. This is what Dad passed on to them. 1) He started the company. 2) He was Mr. Nature in the digestion department. Working for himself, as he did, he was not known for social restrictions. It was a loud burp, a loud fart every time. LOL, what memories! The joy of life is rediscovered by his delinquent children. It is theirs ... once again!
Posted by dbkundalini at 11:03 AM