Zero to 60 -- A Speeding Ticket Reverie 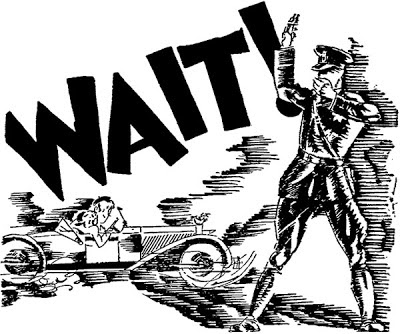 When it comes to crime, we're all thankful for speeding. There may not be anything too dangerous about it for society, like going 40 on a stretch where the speed limit is normally 40 (but it's been reduced to 25 for road work soon to begin), but it's a crime nonetheless. And that's free money for us, society, not only to pay the cops there on the job, but to fund other things.

What I should've been doing over the last 30 years, other than maybe getting married and having someone now to share my dotage, was putting back money in case I did get a ticket. Really, think how much I could've saved by now. Like if I'd only saved 50 bucks a year -- that'd be easy enough -- I would've had $1500! I can't believe I never thought of this till today. It makes me wonder what other great ideas I've overlooked...

If I would've had $1500, let's imagine, I could do all kinds of things if I suddenly got a ticket. Like mess with the cop's head, talking back, trash talking, etc. Acting like I didn't care, letting my dog out to pee on his leg, etc. I'm bubbling over here thinking of it! Plus, throw in that I had a wife or co-husband; we could be engaging in a domestic quarrel right then and there! With $1500 to work with, we'd put on a real production!

Here's what actually happened today. I'm coming over the hill and there's the cop. It's now a 25 mph zone and I'm going maybe 29. He's got the radar gun. There's other cars but I'm in front. I drop the speed slightly, but not to 25. I thought, "He's looking for someone faster." And, wow, before I went another 300 yards, he zipped out, lights going, and was pulling over some other guy. I sang my Better him than me song and proceeded on my way.

But what if it'd been me ... and I had my $1500 ... and a wife or co-husband? The idiot wouldn't have stood a chance! I would've dressed him down like the season's first deer and trussed him up like the last turkey. If you know what I mean. "What seems to be the trouble, Durwood, er, I mean Officer?" Then he tells me I was going 40 in a 25 zone, which till a month ago was a 40. "You stopped me to tell me that? Too much time on your hands, is that the problem?" Suddenly he notices my snotty tone, already over the top.

The spouse interferes, in this scenario a wife. "You stupid pig," she says to me. I whack her, which brings a fine for domestic abuse. "It's $45 for whacking my wife? That's all? Fine, I'll whack her again!"

Just then, my dog jumps out, and has the cop by the pant leg. Big penetrating teeth, and a jaw that doesn't quit. Ripping it up the leg, what a sight. Then she pees on his foot. And if that isn't enough, she runs to the hydrant, forgets she's a girl, and pees Yellow River against that municipal plug. It's only a $90 fine for all that. Twice as much as hitting my wife one time! That's an insult to her and me each. "Either double the first fine," I demand, "or cut the second in half!"

Well, there's good news and bad news. He does double the first fine, the domestic. But the dog has other problems, missing her tags, her shots aren't up to date, and we left her leash at home. Hundreds of dollars in fines. Not only that -- at this point the story gets real sad -- she's running to the other side of the street and won't come back. Criminal trespass and failure to yield. The cop tells me that for public safety I need to get in my car ... now ... and abandon her.

I do so. Which turns out to have deadly consequences. Because, you see, when I got her she was a retired police dog. OK? She was trained in bomb-sniffing but got too old to do it 100% reliably. Well, no one knew this -- I had no way of knowing -- but at some point an actual criminal had rigged the cop's car with a bomb. And seconds after the cop told me to take off -- and we're still trying to figure out what really happened -- she came back toward the police car, and apparently sniffed out the bomb. But with her worsened ability to smell, she got way too close and detonated it, blowing herself, the car, and the policeman to smithereens.

The good news in all that, and it's something you really have to look for to find, is that the city's copies of my tickets were all burnt in the explosion. Meaning not only do I still have the $1500, but my driving record is as spotless as ever.
Posted by dbkundalini at 5:37 PM