She Died of Water Poisoning 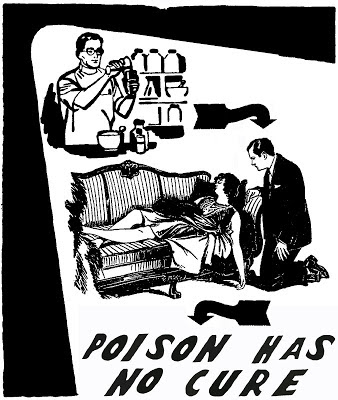 First, there was no evil chemist, no pharmaceuticals, and no concoction that he made, pouring it into a vial that was then passed on to his friend, the woman's boyfriend. Nothing of the sort. The chemist is for illustrative purposes only, showing what might have been. Certainly no arrests are forthcoming in that regard, but with further investigation, I suppose anything's possible.

However, no one saw what the boyfriend may have had in his coat pocket. According to his own testimony, sworn testimony, it was nothing. Nothing out of the ordinary. Nothing he'd confess to. No vial, no poison, no weapon of any kind. Just ordinary stuff, a napkin, his wallet, and a few buttons, all quite irrelevant.

This much is definitely established: The couple was eating at a pizza place. They had iced tea, but then, because the restaurant has a funky policy on refills, when the tea was gone they availed themselves of free water, available in pitchers by the silverware. The man offered to get her water, and went to the pitcher to accomplish the task.

He returns and she drinks. He says, "I figured you'd just drink it." "What was I supposed to do?" "I would've sniffed it to make sure it wasn't poisoned, which it was. You ought to see the effects of it any minute." She looked amused, knowing he was kidding. He was kidding, right? He had to be kidding! Wasn't he?

Apparently not, because he had the serious demeanor of a shark, an expression that looks expressionless. Big blank shark eyes. Teeth. He says blankly, "It should be any minute..."

"The worst part of it ... for you ... is you'll be dead in ... exactly one minute." But one minute passes and nothing happens, she's still alive. Ha, ha, he was kidding! But she remained very quiet, when all of a sudden she lets out a shriek. Indeed, she feels the poison work its way up through her throat to her brain, like a cobra rising from a basket. It seizes her, she clutches her throat, and that's it. Her eyes roll back in her head and she's gone.

He -- we'll call him Walt -- thinks he might run, but of course by now a group has gathered around, and with her passing they're set to restrain him if he does. Someone calls an ambulance, and they call the police.

The police come in like gangbusters and take him into custody. They want to know what happened. Walt recalls the whole terrible story. She failed to sniff the water, then they spoke of it being poisoned. He faithfully recalls all the steps, all the effects of the poison, the head shaking, looking at the wall, going quiet, her laughter, and the rest. Finally, he remember the sad ending, she had dropped dead. Even though, he claimed, there actually wasn't any poison.

The tests came back on the water and revealed that he was telling the truth, there was no poison. It was ruled something like this, maybe the woman had a death wish, and Walt, with his serious-faced joking had triggered it. He probably shouldn't have. As he sat there in sorrow, he had a vain thought, if it could only be: "Next time, sniff the water." Even though -- how terrible -- there can be no next time.

Walt is single now, if anyone good-looking out there is looking for a boyfriend.
Posted by dbkundalini at 7:12 PM