Mister Ed, This Is Your Last Chance 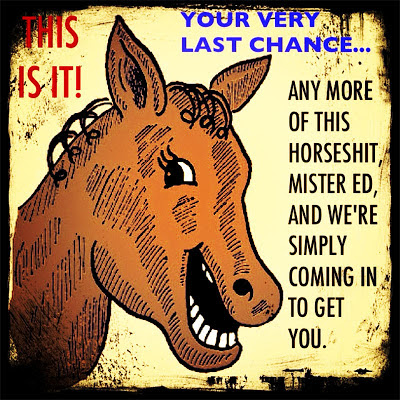 I'm giving Mister Ed this last jab, then that's it, I'm moving on. I've done my part for national security, which was only my duty, and now it's up to the higher powers, the higher echelons, to bring that one trick pony home. Oh, that takes me back, really, to my days on the horse show circuit, years ago. I truly thrill to hear the exhortation of the crowds to the horseman at the end of his showing to, "Bring it home! Bring it home!" What a mad dash it is to make good time!

That's also a good message to you, Mister Ed, "Bring it home! Bring it home!" Don't you feel it, just a little, the desire to make good on your duties of citizenship, to "bring it home" and face justice here in the fields of home, with those beautiful amber waves of grain? That's such a pretty sight, driving by a farmstead, with the horses standing around, munching their way from here to the fence, and swishing their tails to ward off bugs. I love it. And I believe you love it, too, Mister Ed. Maybe a fly creeping around by your eye, and the area around the horse's eye twitching, with nicely evolved little muscles there...

My words to Mister Ed today aren't actually "jabs," so much as hoping to talk American to American, mano a mano, rider to horse, man to pony, man to beast, humanitarian to equestrian, one on one, small nose to big nose, gaining his confidence, then slipping in the bit and adjusting the rigging. Yes, he roamed far afield, to the foreign fields of Hong Kong, Moscow, and Ecuador, a lot of far flung places, where, quite frankly, I can't see why any American would have anything to gain from going to those places. I certainly wouldn't want to range that far from the old barn back home.

I love it here, Mister Ed, and I believe you could regain your love for it, too. Of course I'm sleeping good at night, with a clear conscience, no worries, nothing beyond the day to day stuff: Will there be a mouse in the trap in the morning? Did I remember to give the dog fresh water last night? Are those pork chops that were on sale three months ago getting freezer burn? I'm definitely not worrying, at least too much, whether the Navy SEALS are going to storm the compound I'm holed up in, whether I'll be waterboarded by sundown, or whether I'll ever be able to live within 2,000 feet of a national security installation, then having to have a sign in my yard, "Registered National Security Data Thief."

I know, I know, it's all "alleged" at this point. Which I respect. That's one of the greatest things about America. You get the full measure of justice, whatever you're alleged to have done. All you have to do is avoid living in Texas or some other backwards place, and everything will be fine. So you may as well give yourself up, and get it over with. Tell you what, Mister Ed. Contact me at this blog, and I'll personally lead you to the police department, so you can get this weight off your back. You don't want to be saddled with guilt all your life.

The fact of the matter is -- and I guess I'm doing a little more leaking here than I should -- is that they already know where you are, and they're just biding their time before rushing in, trying to give you one last chance to do the honorable thing. I know if you do the right thing, I'll be proud of you. And rightly proud of my own efforts to talk you down. I'm something of a horse whisperer, as the old phrase goes. I soothe, soothe, and soothe, then gently work the bit in and the halter on, then BAM -- You're in the paddock, in the barn, in the pen -- clouds so swift, the rain comin' in, you ain't a'goin' nowhere, Mister Ed!

One last thing, lest anyone think Mister Ed is solely to blame for this national security fiasco. No, there's other horses in this race. He didn't just saunter in there and fill his saddlebag with 2 million documents without someone else being complicit, even if complicity is only measured in incompetence and lack of oversight. I remember many instances of dealing with government employees. They were sticklers for the rules. They wouldn't fudge on this form, this form, or this form, regardless of what common sense said. "You need this form of ID, this paper, and these records. Nothing less will do." But when Mister Ed was busy emptying out the mow, where was the thoroughness? Clearly, they were in their own stalls, dozing. Don't wake us when you're done...[snoring].

One more chance, Mister Ed, that's what you go, it's time to come home. Think how pleasant that journey will actually be. I know when we used to go horseback riding, ha ha, the horses were so used to the paths we took, they hated it. You had them going down the path, away from the barn, at a snail's pace. It took forever to get anywhere. But just you dare -- hope you're never this unlucky -- to get their nose pointed to the barn, then ... Whoa, Nellie ... they were deaf, differently advantaged as to hearing, there was no restraint. They zeroed in on the barn like a laser, and you were off at the same speed. I remember a limb coming at me at 60 mph, which could've taken my head off!

Please think of that, Mister Ed. Give yourself up, and come home.
Posted by dbkundalini at 2:14 PM