I Shall Be Pope Ye 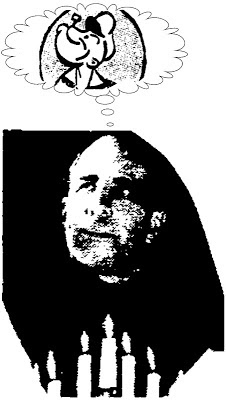 I had moderately optimistic feelings about the new pope, Pope Francis. Which was only natural, considering the last guy having been such a scourge. Francis came in, naming himself after one of my favorite saints, a friend of birds and wolves alike. And one of the coolest garden statues ever. And he's done honorable things, like washing the feet of the poor and children and has been Mr. Cool in other ways.

But now, who knows what might become of him? It was in the news that he's staying in a particular hotel in order to get away from it all. In his own words, “I didn’t want to be pope.” And now he says he's living in the Vatican hotel "for psychiatric reasons." I think I get that. He thinks living in the papal apartments, right there in the loneliest place in the Apostolic Palace, would separate him too much from the people. He'd be living with all the various Vatican cutthroats, etc. They'd be going through his stuff, looking for dirt. Then it's simply a matter of blackmail. And next thing, you're retiring, like the last guy. I'd love to see the dirt on Benedict. Just one look at him tells you he's devious as sin. Yet they chose him! They couldn't find a more honest-looking rat than him? When even then Francis was right under their nose?

As for the psychiatric reasons Francis has, of which I've outlined some, to me this just shows that he basically has it together. If only I had the same boldness in life! Maybe I'd move away from Grandma's house here and find my own place. Really, you think I don't know the family's talking about me? He's 60 years old and still there. We ought to burn the place down, that'd take him out. Or dump out some bedbugs by his window. It wouldn't take them long to find his bed. There he is, rolling around in one of his fantasies, only to turn and see a bug the size of a pillow staring him in the face. That'd fix him! Of course, for psychiatric reasons, I'd be better off anywhere than here. Some place where they can't find me. The State Hospital, wherever, I'm not particular, anywhere.

It's refreshing to hear something honest, isn't it? Just like it's refreshing to hear the pope tell us what we've suspected all along. We sure didn't hear anything like that from Benedict. No, he was right there in the papal apartments, padding around the Apostolic Palace, he didn't care. But the walls had ears ... and eyes. He knew his time was limited. That bleeding statue? That's someone inside it who nicked his nose on a jagged piece of plaster. Watching Benedict, just biding his time, getting enough dirt on him that---- Well, you know the rest, the first resignation of a sitting pope in something like 1,000 years. What's the chances?

I'm really hoping Francis makes it a while longer. We had Pope John Paul I. He lived only a month! I'm still suspicious about that. Then Pope John Paul II. He lived forever. He was the only pope some people ever knew. They were born when he was pope, grew up, married, had children and grandchildren, and finally died. Like the queen in England, trying to outlive 'em all. And then ... you know the succession ... finally someone offed JP II, and, surprise! surprise! there was Benedict standing there, eager to pick up the crown! As devious as they come! Then he's caught doing something behind the scenes -- let's say -- first one to resign in 1,000 years -- and the Vatican decides to clean house.

But can Francis make it? He's already talking about his psychiatric health, and telling children he didn't really want to be pope, etc. I have my suspicions of what must be going on behind the scenes. And it ain't pretty.

OK, what about me? Do I want to be Pope? If elected, yes, I'd give it a go. And just like Francis chose his hero, St. Francis, so I would choose my hero, my lifelong hero ... Popeye, making me Pope Ye.

What kind of pope would Pope Ye be? All the Vatican enemies, the various cutthroats infesting the place, would have to be on their guard. Because I'd eat spinach, puff out my chest like a battleship, and destroy them all. I'd BIFF them and BOP them, and always I'd STOMP them. Let's say I punched them so hard, they flew up in the sky. Before they came down, then, I'm punching trees so hard they become boards and fall down as a dozen highchairs. The cutthroats land in the highchairs, which snap into place, leaving them there to fuss and cry, shaking violently their rattles.

As Pope Ye, I would immediately ordain women. Yes, Olive Oyl isn't the strongest role model for women. She always needs my assistance against Bluto, who's almost sexually deviant enough to qualify for the military. But once Bluto was out of the way -- a type of devil, or Benedict, if you will -- then Olive would be free to bloom and grow. I'd immediately ordain her as priest. It would be a complete renaissance for the church, which to this moment is stuck hopelessly in the mud.

Then, as Pope Ye, thinking of little Sweet Pea, the baby in Popeye cartoons, as well as Popeye's four nephews, we would immediately address the child abuse bullshit that has given the Catholic church such a black eye. I would gather all the male priests and demand them by everything holy to immediately confess their sins. The sheep and the goats. Spinach cures all ails, and in this case it'd guide my judgment. And if it's just a matter of them being too horny they can't keep it in their robes, of course I would open it up so they could get married.

That's how it'd go as Pope Ye, if I were to be chosen. Just as my patron saint, Popeye, always brings everything to a happy finish, so I would completely reform the church. Then I would take on Protestantism, ridding it of snake handlers, Pat Robertson, strychnine drinkers, fundamentalists, and mission trips to Haiti (there has to be some other place these people can do good!). As Pope Ye, just to show I care about the unfortunate, I would personally go to Haiti and knock some heads and get it straightened out down there. It has to be a corrupt government. If we were able to get rid of Benedict, of all people, the persistent failure Haiti represents shouldn't pose an insurmountable problem.

Lastly, my ascension as Pope Ye has a biblical foundation, like when Jesus said, "Ye of little faith."
Posted by dbkundalini at 2:25 PM