Better Balance In My Life 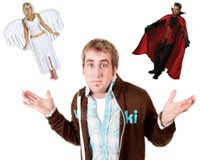 Is this the end?

Have I come to a dead end or a turning point?

I feel like I need a better balance in my life.

But which is which? Is the angel trying to help me? That'd make sense. "Look out for yourself. Read more. Meditate." But maybe it's the other guy, in red. And it has been enjoyable to a certain extent. "You're driven to share your substantially immense talents with the world."

But everything comes to an end eventually, of course. We're forbidden by death, let's say, from gardening in the spring after we've met our demise. At that point the only gardening you're doing is pushing up daisies.

So it's now or later.

I could cut back. Get rid of the whole Twitter component of my day. Which frankly hasn't added much to my life. It's kind of like being friends with the wall. You get about as much out of it.

It's definitely something I'm looking at.

Or, who knows. I could continue to do something in a low key way, like a burst every now and then. Whether anyone cares or not, who cares? At least I'm amused, and that's what really counts.

I'm listening to these two voices. "Better balance" and "Go for broke."
Posted by dbkundalini at 7:25 AM