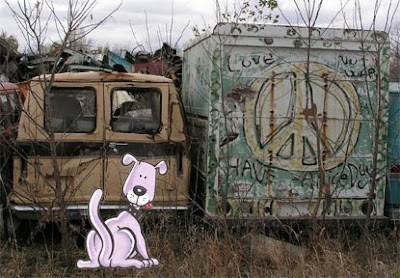 How about having all the better qualities of a junkyard dog, then still be nice?

I was looking at pictures of junkyard dogs online and of course they're very vicious looking. Like someone in charge of the junkyard wasn't taking good care of them or showing them the proper affection.

It's probably true that some dogs have to be trained to be mean, like the ones that work at the police department. The officer aims a remote control at the car, the window quickly goes down, and out leaps the dog to take on a bunch of drunks in a parking lot brawl at a bar. Or they're chasing a rapist through a field. That's understandable.

If you've ever seen it in action, even if it's just a demonstration, it's a lesson that stays with you. If an officer has on a steel-meshed arm protector and the dog charges him and gets hold of it and the guy's going around in circles and the dog is flying through the air while clamped tightly on the arm, that's scary. Because the rest of us don't have steel-meshed clothes.

As far as junkyard dogs, they're usually thought of as protecting the junkyard, like from some guy who would come in and steal a car radio or something. If there's a big mean dog on the prowl, you change your mind, save your money, and go buy a radio is you want one so badly. Or you use a diversion. Have a friend with a big juicy steak over by the gate, then you go creeping in, get the radio and get out.

Think though how easy it'd be to kill a junkyard dog. Poison on a steak. A gun with a silencer. Whatever. So if I'm a junkyard dealer I'm not getting ultimate protection from a dog. If that's my idea of big security, then I'm obviously deluded.

So a junkyard dog could be nice just as easily as mean. Especially if you took care of it and it was just there as a mascot or friend instead of a cheap guard. That doesn't mean that the dog wouldn't do some of the work of a guard, since dogs are automatically territorial. They don't care about radios, they just want to keep their turf.

But I've been places where there'd be plenty of turf to guard, yet the dog is mellow. Like a car fix-it place. The dog's just laying there, sleeping through all the racket of cars being fixed. Wrenches falling to the floor. A screw driver whizzing through the air. (I once knew a mechanic with a very short temper.)

I'm saying all this about junkyard dogs since it applies to one of my self-help concepts. How about being a nice junkyard dog? With all the attention and passion that normally applies to junkyard dogs, but with a nice, mellow streak.

Junkyard dogs are thought of as being tenacious, like dogs generally are. But you can also be tenacious and nice. Alert, playful, absorbed in your being, keeping an eye on your junk, but still you know it's just junk. You're mellow enough to keep to the paths, not overly sidetracked by junk tending.

It's a compelling image. One that's making a little noise, so I'll check it out today. One that smells a little interesting, so I'll wander around and see what's going on.
Posted by dbkundalini at 7:20 AM