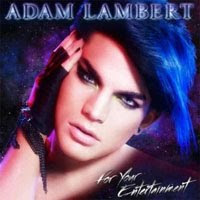 Lambertmania sweeps America. I just hope he can keep up with Boylemania, as in Susan Boyle.

I would hate to see Adam Lambert upstaged by the one-song genius from England. Of course by now she has more songs, having an entire CD coming out.

Adam Lambert deserves a spot on the top of the chart for maybe two years straight, then someone else can go up. Only to be knocked off by his second album. So he'll be Number One perpetually from now until he's a senile old man in the nursing home going, "I used to be somebody."

I ordered the deluxe version of the CD. I hope it was worth it because it was quite a bit plus $4.99 postage. Ouch. One bright side, I got three immediate downloads. I don't know if they're all non-CD tracks. I know "For Your Entertainment" is on the CD, since it's the title track. So I'm listening to those tracks. "FYE" as mentioned, "Whataya Want From Me?" and "Master Plan." They're future favorites of mine after I become familiar with them. I heard "FYE" the other day on a streaming thing. And I understand the CD is streaming on MySpace somewhere.

Now, to see if the CD comes right away. It's from Adam's official site, so hopefully they know something about mailing stuff right away.
Posted by dbkundalini at 6:33 PM