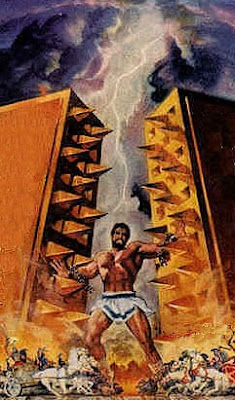 Woo hoo! That was exciting!

I watched the movie "Hercules Unchained," from 1959, starring Steve Reeves.

At first I was watching it just for the fun of it. But pretty soon it became a project, as I saw how perfectly it all related to my "Drive for Pride" campaign and the teachings that go along with that involving personal confidence and self-esteem.

Then, with clipboard in hand, I watched the rest of it as a labor of love, hoping to inspire others to unchain their inner Hercules. It certainly worked with me -- and while I'm atypical in many ways, I'm not that atypical. I'm like other guys. I put my ancient Greek kilt on one leg at a time.

The thing that really hit me in the movie was when Hercules forgot he was Hercules. He drank some kind of memory zapping water and suddenly he was in the thrall of a lovely, but deadly, Greek lady. All her other lovers had been killed and turned into wax statues, and she had a perch with Hercules' name on it!

Hercules has a youthful sidekick, Ulysses. Ulysses knows Hercules' power, but since he forgot it, it's no longer there. He wants Hercules to try to bend a big metal thing but he can't. So he tries to keep Hercules from drinking anything that's being provided to him in this palace. Since it's all Forget'em Juice. Slowly but surely, Hercules starts to remember his identity. And after a while Ulysses brings him the metal thing and now he's able to bend it! Then before long, they escape, including the scene where Hercules pushes open a big sliding door that has deadly spikes enclosing on him.

We don't especially want to be able to bend steel in our hands. That's not my challenge. But we don't want to lose or neglect any of the powers that we have and may have forgotten. Anyone have any inkling of the powers you had as a kid? I know I could run faster, jump farther, and think clearer than lots of other kids my age and size. In a way, I just had the confidence that it could be done, but beyond that there was the sense that That's just the way it is. I didn't have a lot of prior history that told me it couldn't be done.

It's the prior history that always seems to come into play these days. You can't do it, you'll never get it done, also because That's just the way it is. You haven't managed it up till now, so you may as well give up. Even if no one says it to you, you say it to yourself. So we're settling for second or third best, maybe we're settling for nothing. And we're tipping back another jar of Forget'em Juice. And there's a perch somewhere with our name on it. Just nail him here! There's no life in the old boy anyway!

Who knows? Ulysses knows! Put down the juice. You're still Hercules inside. Let your mind and thoughts clear. Pick up the big metal thing and see if you can bend it. Then advance on to those big gnarly doors. Finally you'll be pulling over big towers with arrow-shooting soldiers screaming and dying at your feet. It'll be a great day.

Unchain the inner Hercules. Make Ulysses' day!
Posted by dbkundalini at 7:20 AM