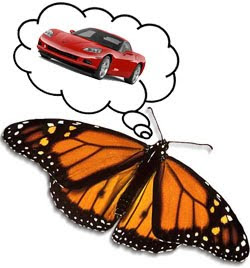 We're used to various mind tricks having to do with being optimistic or pessimistic. Such as, Is the glass half empty or half full? Or, Would you say your best days are ahead of you or behind you?

Let me say, if you're ever in for therapy, unless you're in hospice care, you'd better say "ahead of you" or they'll immediately lock you up and throw away the key. In which case you will have been right that your best days are definitely behind you. But who hasn't had pessimistic friends who haven't come back?

We tend to think optimism is good and pessimism is bad. Of course if we were being entirely honest we would have to say there are legitimate reasons for one or the other depending on the circumstances. Bad things do happen. But we don't want to mix up entirely the things of optimism and pessimism and realism. You can be optimistic and realistic at the same time, or pessimistic.

I'm going to apologize up front to any scientists who may think I haven't got it right. I'm confident in expressing potentially ignorant scientific theories, though, because I heard that science is never quite sure of anything. If it turns out that they're sure they're never quite sure of anything, I don't know what to do with that contradiction. But regardless of how that plays out I will use science's admitted ignorance to cover my own.

It's my theory that the organism -- whatever it is -- is neutrally optimistic. What that really means is it's right in the middle, meaning essentially it's not optimistic and it's not pessimistic. This is apart from higher consciousness that starts worrying about things. But I'm saying it's neutrally optimistic rather than pessimistic because if it goes any direction, that's it, toward the positive. Evolution, transformation, attainment...

Whether it's foraging for food or a place to stay, the presumption is that it's going to find what it needs. It is a part (perhaps at one) with its environment. There are reasons it could be pessimistic, of course, such as if we've damaged its ecological system such that there's no food. But even then it seems that without the higher consciousness worrying about it, it's going to remain neutrally optimistic until it eventually dies of starvation.

But we -- we have our worries. So we do a whole weird swing from optimistic to pessimistic, being more able to scope out the angles. We have a lot of experience and history that keeps us thinking of the odds. That helps us, obviously, in that if there's no food, we don't just stand there and die, if we're able to do otherwise. We press on and eventually find a McDonalds.

So having a higher consciousness helps us in many ways, but it also hinders us. Because of all the worries.

In my theories -- the whole self-esteem, confidence, and pride program I teach -- I try to get people to see that a lot of this psychic worry is unnecessary and a hindrance. Especially if you cross the line in the middle that goes from basic organism needs to the higher things, personal confidence, self-esteem, up through spirituality. There's no predator trying to get you at that point, except your own doubts or other distractions based in your motives.

The key, it appears, once you're past that middle line, is to somehow consciously allow yourself to go back into a more natural consciousness, which is true of the basic organism without the worries, that neutral optimism. How you do it, of course that's the main show.

Probably a summary statement of how you'd do it is simply to forget it and live. Not forget it as in giving it no thought, but not clamoring, demanding, fretting about it, or assailing the gates. It's like this, "He who climbs up some other way is the thief," instead of going through the door in a natural, unassuming way, with pure motives.

So be that! And by "be that," I guess I mean "be that" without really trying! Be neutrally optimistic today!
Posted by dbkundalini at 12:28 PM