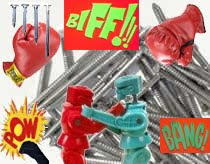 This is my fourth and final post today on the theme of being "Tough As Nails -- Nail Tough."

It's been a pleasure to develop it as a theme, starting with the idea, then carrying it through to the finish at the close of the day.

Anything like this can potentially change your mind and life. Without much expense. No one's asking you to buy a shelf load of self-help books. Or go to an expensive conference.

Instead, life is free for the living. (That's also a theme we'll be developing in upcoming days.) You've got what you need to get the job done in a good way. Or certainly everything can be gotten quickly if you just know a little bit about it.

I myself, like I've said a couple times today, am not Tough As Nails -- Nail Tough. But I'm aimed that way. Anyway, whether it's a state of mind or a psychic condition that you'd want to be all the time, I can't see it. It'd be a lot better, in my opinion, to be Tough As Nails -- Nail Tough when you needed to be. And I actually can manage that for brief stretches of time.

Now that I've said that, I hasten to add that being Tough As Nails -- Nail Tough even for brief stretches is not a one dimensional thing. It'd be mindless at that point and get you in more trouble than you had before. It's not just standing Tough, let's say, but it has to be mixed in with a lot of good sense, such as yielding, bobbing, weaving, hewing a middle course, etc.

What it means, then, is to be Tough As Nails -- Nail Tough in all those (and other) pursuits which make up the overall pursuit.

It's a concept that suggests strength, but strength in all its possible dimensions. Often surprising.
Posted by dbkundalini at 7:47 PM