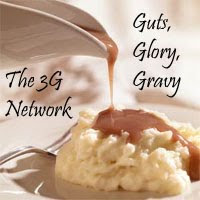 Gravy everywhere! I had biscuits and gravy today, just like I said I would. Which proves I'm a truthful person. It pays to be truthful.

A big sizzling skillet of bubbling gravy, working its way around the sausage chunks, looking every inch itself, what gravy looks like.

The biscuits heated at 400-something degrees in the oven, awaiting their true baptism by fire when the sizzling gravy inundated them.

Moments later, breaking the biscuits apart, fingers burning, I scattered them on the plate and ladled them to give them their coating.

To get gravy just right is both an art and a science. It takes someone with a degree from a chef conservatory, or at least a skilled cook.

It was just right, not too runny, not too thick, in that just right category that anyone recognizes, like it was being served to Goldilocks.

To go from the literal, edible gravy to the inner psychic gravy or the payoff for dedicated effort--called gravy--is something on my mind.

But first I savored the actual gravy, knowing it was cooked for me, for my pleasure, my enjoyment, to nourish me when I would be eating it.

Yes, that's what it is when we say gravy. Someone has the guts to step out, leading to the glory of the experience, to the reward: Gravy.

It's a 3G network I understand. If you can work up the confidence, it'll feed on itself. You'll go from Guts to Glory to Gravy every time!

If your experience is more limited than what you see described here, try again. Step out on your dreams and see: Guts, Glory, and Gravy.
Posted by dbkundalini at 3:17 PM