From Guts To Glory To Gravy 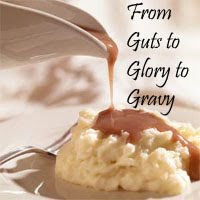 Gravy is the good stuff. Whether it's the literal delicacy we pour over potatoes and savor. Or the benefits that come from hard work.

I definitely like both kinds, the literal delicacy that thickens biscuits and accentuates sausage, and the payoff after dedicated work.

Gravy gives unadorned food something to be proud of, exciting the senses. And when we say "The rest is gravy," we know that's good.

But how you get to gravy? That's another matter. You can labor for years over a stove and not get it. And it's the same with gravy rewards.

Do you have the guts to go for gravy? That's where it comes from, with this progression: "From Guts to Glory to Gravy." The Three G's.

The guts is what we need when we step out with a plan, because, think about it, there's always something there that could hold us back.

Sometimes my present circumstances holds me back, because so most of the time I like the security. But what I get isn't the good gravy.

It's not the good gravy but I eat it, and it's nothing but a thin, worthless, watery slop. It's not satisfying, but again it's security.

There's no pride in this thin, worthless, watery slop that's not the true gravy. It doesn't deserve the term, let alone my desire for it.

If you have something you want to go for -- ultimately to get the gravy -- you need to have the guts to step out and go for the glory.

Think of those you know who have the gravy that life gives. They'll be people who had the guts to go for the glory. They stepped out.

That's the good stuff, made the good way, sustaining those who are smart enough to get it. They went for the glory, the rest was gravy.

The gravy is out there, within your reach!
Posted by dbkundalini at 9:00 AM