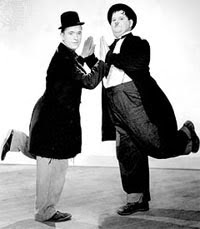 I wonder what my double is up to today.

If he's my exact double, then of course he'd have to be doing exactly what I'm doing, which is writing this, in which case I ought to be able to Google it in a couple hours and find him. Of course there'd have to be enough difference to discern him from me, or the Googling would simply be of myself and would get me no closer to him. But how am I supposed to know what the differences are? So I'm no closer.

And notice my thoughts on this are shaky, since if he's my exact double, then there wouldn't be any differences. OK, he can't be my exact double because that would be like looking in a mirror, but opposite. It's not likely there can be an exact double -- in fact I'm going to say it's impossible, because what would be governing the two of us to be exact and to be doing exactly the same thing. It's absurd.

So what am I looking for? Not one exactly the same. But I have it in mind that there's this double, you see, who's close enough in mentality at least, close enough in behavior, and probably close enough in age and other factors, for me to look at him and say, Hey, we're doubles! A pair of the same thing! Soul friends of the first rank! We think alike!

I'm thinking my double has to be male, although in the mixed up world of polarities, north and south poles, etc., what if my double turned out to be a woman? That would present way too many problems, so I hope she isn't, or he isn't a woman. It'd be way too awkward. Because since she's my double, naturally she'd only be thinking about one thing. Which would be very bad, because of course I'd be thinking of it too. And that's not my idea of what doubles should be up to.

For a million reasons, I'm going with the certain knowledge that my double has to be a man.

The big problem, then, looming before me, is where the heck is he? Is he in China? England? The United States? Some other country? It doesn't seem like he could be from one of these other countries, since I'm from the U.S. How could we be doubles if we didn't share basically the same culture? I'm not just a person off an assembly line like the Bionic Man. Not a blank slate. There's got to be something about us that resonates, which excludes a no comprende relationship.

My double might be very close and just not making himself known. I know I've been bubbling just under the surface myself for quite a while. And now I've bubbled up to the top, somewhat, but my double might still be goofing around in silence. Maybe he hasn't got the self-esteem that I've discovered, the ability to step out and say to the world Let's get it on.

It's all a very tricky subject. Just because we're doubles doesn't mean we're even close to being on the same page at this moment. So it could be there's virtually no clues anywhere.

I might be left doing what I'm doing now, which is just waiting for something to happen. Right now I run everyone I meet through the "My Double Recognition Sieve" (not an actual thing but I give them a silent recognition test). Certainly I haven't come across my double by this method yet. It's a slow process, because the number of new people I meet on a daily basis is low.

The ones who aren't my double aren't rejects, by any means. I respect everyone I meet and think of them as amazing through and through. But they're definitely excluded as far as being my double. So they have this relationship out there ... and the closeness right here is reserved for my double.

Anyway, today I'm thinking of my double's unknown life. And wishing him all the best for a great day. I know he has to be conscientious about getting things done. So good luck with that. I know he would probably say, "No luck needed, I'll get it done because that's the kind of person I am." Or something like that.
Posted by dbkundalini at 7:20 AM