The Big Payoff Is Gravy 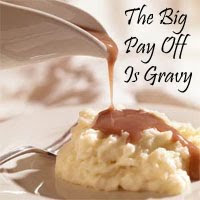 There's excitement in the air today, and it's all because of something as simple as GRAVY! Thank you for your interest. It's been great!

I've learned some of the secrets and I like to pass them along. Because I also know how it is. We're not always sure what the secrets are.

Then something comes along--a way of comparing, contrasting, or a way of encapsulating a philosophical stance through an image, a parable.

I hadn't seen the cartoon "Chow Time" for a number of years, which has the great line, "This time we didn't forget the gravy."

But today, with gravy being the theme, I searched on You Tube. First, I found a Spanish version, which wouldn't do me much good.

Then I found a high def recording of it in English, a gold mine! It brought back a lot of good memories, and also refreshed my memory.

I'd forgotten the whole set up, to be honest. I hadn't remembered the mouse, just the big huge dog, hungry, famished for another meal.

Then at the end, this is a biggie, I'd forgotten that they didn't hold the scene longer when they were pouring the gravy down his throat.

It mercifully fades out after you get the idea that they, the cat and mouse, have sweet revenge on the dog for being such an oppressor.

The dog got what was coming to him, but it's a very cruel (but wonderful) moment. We used to talk about it and laugh while eating gravy.

Today, though, the secret of the whole thing is this, that gravy stands for more than gravy. It stands for the rewards of diligent effort.

Like when we say, "The rest is gravy." It means there's a surplus that we have wrought or brought about through an effort or an investment.

But how do we get to that level of success, the gravy? My belief is that we have to step out, step away from our safety zone, as it were.

Stepping away from our safety zone takes guts. Then guts leads to efforts that often pay off. That's glory. And the big pay off is gravy.

So the philosophy that we've put forth--a great one for self-esteem, confidence, pride, and success comes down to this: GUTS, GLORY, GRAVY.
Posted by dbkundalini at 5:43 PM