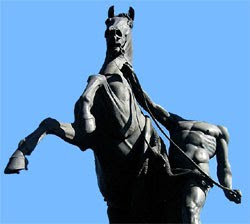 Through the dark of night when barely a thing can be seen and all the land is asleep -- except maybe an unfortunate traveler -- the Headless Horseman thunders his way along the roads and paths.

He's looking for something as he passes. He strikes terror in the hearts of those along the way, because everyone believes he's looking for his head. And that if he can't find his own severed dome he'll cut off someone else's to take its place.

Perhaps it will be an old gray haired farmer's head. Or the head of his kindly wife. Maybe a young man who stayed too long at the barn dance and was discovered late along the path. Or a girl separated from her friends through silliness and a wrong turn. What if he shows up with a knife over a crib, picturing a baby's head on his massive shoulders?

There has to be something supernatural, even special, about a rider without a head who's still able to live!

I remember a night not so long ago, a night very much like this one. I was on the path and I heard the snorting of his horse. Then there he was, appearing in all his headless glory, riding like lightning up the path and over the bridge. I had just a moment to duck under the bridge. Among the frightful sounds I heard that night was the sound of my own heart pounding with fear.

Did he hear me? At first it didn't seem like he had as he kept going. But the senses of this creature are said to be very keen. So I'd just crawled up, my heart still pounding, when I heard the sound of the hoof beats again coming my way again. This time I didn't have time to escape.

Suddenly he had me! He swept me up with one powerful arm and off we went! There I was, getting a view of the passing scenery that few people have had, bouncing, helpless in every sense of the word. Where he was taking me, I did not know. But one thing I assumed, my head was probably dead meat!

He carried my roughly into his cabin. The place was way back in the sticks, a terribly kept place. I knew right away this was a guy who needed help. Everything about the circumstances cried out that he had poor self-esteem. But I thought maybe I could help him, if he'd let me. I was in a chair, looking up as he drooled with blood lust, then he staggered toward me with a big knife. In that moment of truth, I summoned the discipline not to flinch. My best bet to live was to help him live. And I didn't want to just leave him hanging.

I asked if he could wait a minute -- "What's a minute? There's no hurry. We've got all night." -- and calmly directed him to sit down. The whole thing must've startled or confused him. I saw him scratch his neck as if to say "Huh?" But to his surprise, he did just as I said.

Next, through a series of probing questions, I got him to open up about his self-image. Not having a head is a downer, I commiserated with him, but I directed him through a personal inventory, pointing out that he still had plenty to be proud of. Obviously his other body parts more than compensated for his lack of a head. This was suggested by the fact that he could ride a horse, carry people, and sit listening to me in a pleasant way.

The thing to do -- and this goes for all of us -- is to be proud of what you have, not to be consumed with regrets for what's missing. Think of it: The fact that you can have regrets means there's a consciousness in there that very much has ideals in a central place. Once you've realized that, you can see in a flash that you're better than you think!

I shared with him some of the teachings about how we picture the soul and consciousness, that in the West we definitely localize it more in the head. But it's not that way universally. Other cultures see the consciousness in the region of the heart or even the abdomen. Maybe that could be helpful to him.

He was interested to learn this, and agreed with me that whatever made him him was clearly present whether he had a head or not. In fact, I said, he ought to take pride for being able to do so much without an appendage that the rest of us consider vital. He was miles ahead, so to speak.

It was a real heart to heart. This in spite of the fact that I could smell liquor on his breath. Which doesn't do anyone any good. Especially if their self-esteem is low, like this guy's was. That's what brings forth the rage and the crazy riding at night.

Anyway, we parted as friends. I said I needed to go, not that I really wanted to, but that I felt he needed some rest. I could stay forever, I said, but I felt that I wanted to pull back to give him space to process what he had learned. "You knew these truths all the time," I assured him, "you just needed a nudge, someone to bring them forth so you could appreciate them with fresh eyes."

So why am I huddled up with the farmers and babies on this black night, hiding out from the Headless Horseman? Because, like them, I know he is looking for something! He's looking for me! Because he thinks he needs me. The poor guy. He drinks, then he has to relearn the whole thing over again.

But I will not stand for this constant regression. I don't want him overly dependent on me and my teachings. Part of my whole philosophy as a self-trained therapist and lifestyle-sciences coach is that eventually I want to work myself out of a job! It's true. I want to give people the tools with which to help themselves. But if they focus in too much on me, that's just as much a crutch as trying to cut off someone else's head and make it your own.

I'm afraid if I saw him, frankly, I might indeed lose my own head and lash out at him, again, putting myself in a dominant position over him and inadvertently causing him to regress further. It's better that I just huddle here until morning when he'll be sobered up.
Posted by dbkundalini at 7:21 AM