Warring Angels At The Fitness Center 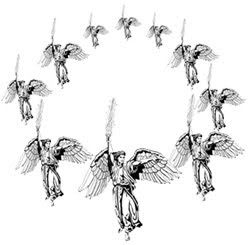 IT'S THE BLACK OF THE NIGHT:

There are different ways to picture a hedgerow of warring angels, which to me is an endlessly fascinating subject.

The general way of course is to have them surrounding you, alternately looking toward you, then out as a matter of vigilance.

But it could be you're sitting on a couch and the only access to the room is a door. They could be in a phalanx facing the door.

Or they could become extremely small -- the way you visualize them -- and sitting on a bookshelf, legs hanging over the edge.

I don't want anyone to think you're the boss of a hedgerow of warring angels. Because they answer to a higher power.

But as the person they're guarding and helping, it could disturb you to think of them surrounding you, say, if you're seated.

If I pull my chair out to face someone facing me, I don't want anything (or anyone) between us, so they would be at my side.

Maybe a few would be at the door, in case the person facing me tries something. Then it'd be like Maxwell's Silver Hammer.

The key thing to know about a hedgerow of warring angels is you don't really have to worry about them. They worry about YOU.

They're sent more or less to protect, but also to give you the confidence that no matter what happens, you're completely OK.

Goodnight everyone. I'm taking my hedgerow of warring angels to Goodwill to look at records, then to the fitness center.

When we're at Goodwill it's their job to nudge anyone out of the way who's hogging the place I stand, a quick invisible sword to the butt.

Then if you see a guy at the fitness center whose heavenly entourage is using every piece of equipment in the place, that's me!

Say hi to me. But don't get too close or make any sudden moves. Please.
Posted by dbkundalini at 8:36 PM