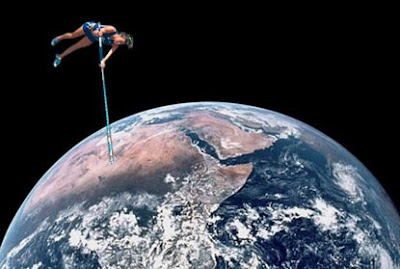 Baby steps are for babies, finally pulling themselves up with the couch, then turning around and falling flat on their butt. Fortunately their butt is already close to the ground and padded by a diaper and most places where there's a couch are also carpeted, so it's no big deal. "Me fall down and go boom."

But pretty soon they're back up and at long last they get it, so they're able to walk, then run, and they put away their crawling talents until many years later when they're married.

In my life I insist on everything being done with gigantic strides. Like the Apple Bonkers in Yellow Submarine. Like Uncle Sam on stilts at the Fourth of July parade. Like the "Keep On Truckin'" Robert Crumb cartoon guy. I have my biggest and best foot out in front of me, encroaching on the entire foreground, with a big round world receding behind me. The curvature of the earth is right there two steps back.

Gigantic strides. I love the sound of the words.

Everything you set your mind to you can at least take a stab at. And having taken a stab at it, keep on stabbing till it's bleeding at your feet. Quitting smoking? Done! Exercising more? Done! Losing weight? Done! Going back to school? Done! Having another kid? Skip it! Unless you get a prenate that he'll support you in your old age.

Like the Bible says, "There are giants in the land!" Yes, I'm one of them. This land has giants. And that's who takes gigantic strides. Giants.

Today I will get it done. I will take enormous leaps, steps bigger than my feet physically allow. I will leap tall buildings in a single bound. I will straddle continents, then bound from one mountaintop to another.

Are you with me? Is that going to be your way too? Let's leave the baby steps to the babies. We're big boys! We're big girls! Striding is our way! Big, huge, enormous, gigantic strides!
Posted by dbkundalini at 7:22 AM