Heavy On The Gravy, Please 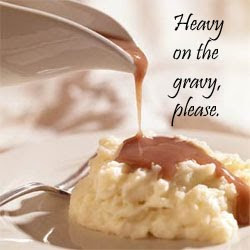 The lifeblood of potatoes. A sopping, flooding lake. Whose levies and dikes know no integrity.

The thickness of sausage and gravy keeps biscuits on the same page. There's a coherence that keeps your teeth occupied.

It can be light, thin as tomato juice. Or thick and ponderous. Take the it out of gravity and you've got it.

The greatest cartoon line in history concerns it: "This time we didn't forget the gravy!" Such sarcasm, such revenge against his oppressor, with what? With gallons and gallons of deadly gravy poured down his throat with a giant funnel.

The making of gravy is a mystery known to none but the world's cooks. How you can mix meat drippings and some kind of liquid or powder and come out with gravy is an esoteric truth guarded by a close coterie of tight-lipped devotees. They glide through the hall from the chapel to the kitchen.

I'm sure long years of devotion, prayer, and one vision after another would be all it'd take to open the ultimate revelation. But most of us lack the faith to believe we could be in the know. I personally am resigned to enlisting the services of an infed priesthood whenever I need a fix.

Even dogs have the yearning for it -- Gravy Train. It transforms their crunchy boring food to savory soft chews peeking out of a delicious brown soup. They eat it in big gulps, pulling their head quickly back to make sure they suck up as much of it as possible with each approach.

It's a liquid, it's a food. It's a delicacy. It's practical, allowing you to clean the pan and let nothing go to waste. You dip in it. You mix it with everything else.

Children are fascinated with gravy and learn that it always seeks its own level.

I'd like to have a big bowlful of gravy now. The good stuff.
Posted by dbkundalini at 7:13 AM