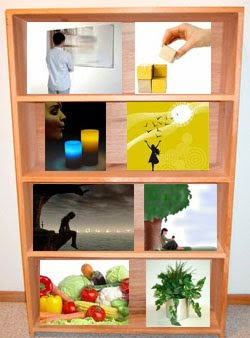 It's probably no secret that my favorite Jonas Brothers song is "Shelf." I listened to it just a couple days ago.

It's a good driving rocker, very exciting. More than that, what can I say? I'm way out of their age group but I do have that one CD. Although now that I think of it, didn't I burn it in the yard after they insulted people over 35? I believe so.

Now I remember: My burning it was either a joke or symbolic, which is appropriate since the second song on the album was "Burnin' Up." To watch it go up in flames, as I now recall, was an experience that made me delirious with revenge.

But it was definitely symbolic, the burning, since I know it's on my shelf with everything else. Ironic, huh? They don't want to be put on a shelf yet that's exactly where they always end up.

I have lots of shelves with lots of things. Just the way I like it. Except it'd be cool to live in a big warehouse with miles of shelves. And to have your own personal forklift to lift things 40 feet and stack them on big pallets. I'd be beeping the thing when in reverse even though there'd be no one else there. With a hard hat.

One of my favorite images, from Kafka books and movie adaptations of his books, is of shelves overstuffed with papers, books, knickknacks, folders, and who knows what. Like in his old lawyer's office in The Trial or the mayor's home in The Castle. File cabinets stuffed haphazardly.

I don't actually keep my shelves that poorly arranged -- but basically I do, since nothing's precisely organized. Books aren't in alphabetical order or even grouped by authors or type. I do have some things ordered and it's useful. But there's lots of other interesting junk stacked around with them. Then on some they're in there with a layer in the back, middle, and front. However much space there is, that's what gets used.

Like almost all my poetry books are on one bookcase. But it's not as nice as it sounds, since nothing's ordered. I still have a hard time finding things, because I don't know what I have precisely. I was looking for Swinburne the other day but couldn't remember if I had anything by him. I couldn't find him if I do. Plus there's other junk up there loading it down, including an old transistor radio, CDs, cassettes, pictures, a dancing hamster greeting card, a chewed up hard drive, and so forth.

I have other shelves that are worthless, because where are you supposed to stack the junk of a lifetime? I'd like to have them all in the basement, where there are others, but things down there always has a chance of molding. Some is.

I saw someone say the other day that if you get something you should get rid of another thing. So you'd have an unchanging number of things, which sounds too arbitrary to me.

I see bookcases in magazines or ads for bookcases. And they're weird. These people don't need a bookcase. They have about five books, a few other things on the other shelves, and it's virtually bare. What do they need a bookcase for?

You only need shelves when you're going to use them. To their fullest.
Posted by dbkundalini at 7:19 AM