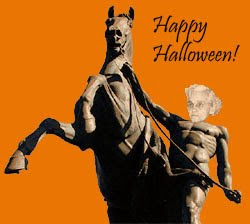 When I was a kid, there was one really scary guy who always raised my terror level to RED, and it wasn't always an election year.

That guy was the Headless Horseman, who seemed like he was always just over the hill, or, being where I was then, on the western horizon.

I needed to get in when it was dusk and I tried to make sure other kids or adults were somewhere nearby because of what might happen to me.

The Headless Horseman could come riding out of the distance at any time, then snatch me up and carry me under his arm as he traveled on.

Little did I know, growing up, it would happen exactly that way. By then I thought he'd be looking for smaller prey, but, no, he picked me.

That's my story. I was on a lonely path one night when he came bounding down the road, seemingly crazy but still a really good horse rider.

I hid under a bridge and thought I was safe, but he noticed and came back. Trembling in fear, I saw my life hanging in the balance, UNTIL...

I was staring certain death in the face. There was no escape, except, perhaps -- it could just work -- I diagnosed his personality issues.

At that point I became a helper to the Headless Horseman, leading him to see that what he was doing with his life wasn't the best course.

I would be dead right now at his hands. But I chose to address him person to person, one broken person to another, with understanding.

When someone's as mean as he seemed to be, to me that means they're just closer to the edge, and it doesn't take much for a breakthrough.

We worked on the issues: Self-esteem, obviously a problem, missing a head. Confidence, he actually had, but it was all negatively driven.

And Pride. Like confidence, pride is easily counterfeited. Pride has a wild side. But with a good self-image it can be manifested better.

There may be plenty of monsters to worry about on this Halloween. But I know of one who's a pretty good fellow, unless he's been drinking.

If you see the Headless Horseman riding by, wave to a friend. But if you see a bottle in his hand, for God's sake, run for your life!
Posted by dbkundalini at 5:18 PM